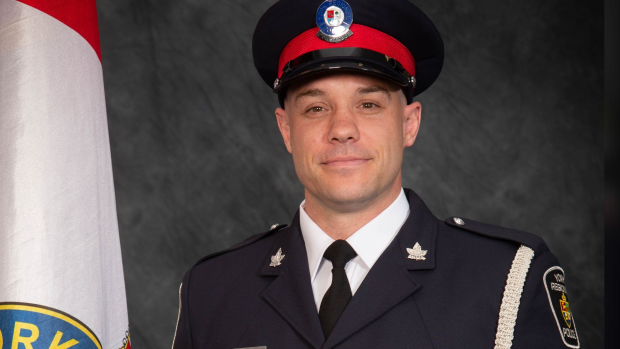 A York Regional Police officer who was killed in a collision with an allegedly impaired driver last week being remembered as someone who was “so many things to so many people.”

A funeral was held for Const. Travis Gillespie in Markham on Thursday, a day after funeral for a Toronto police officer who was murdered in a GTA-wide shooting spree.

The memorial service for Gillespie was held behind closed doors to friends, colleagues and family only, but a stream of the proceedings was provided by the funeral home and audio was broadcast in a media gathering area.

Those who spoke at the roughly two-hour service shared stories and thoughts about the loving partner, son, grandson, brother, uncle, loyal friend and dedicated police officer Gillespie was.

Gillespie joined YPR in December 2019. Prior to that he was a Metrolinx/GO Transit Sergeant for 11 years. The Northumberland County native also volunteered at Community Living and at Primal Mixed Martial Arts Academy in Leslieville.

His best friend and longtime colleague Taylor Gibb, a York Regional Police officer who also worked with the fallen officer at Metrolinx, said it’s impossible to “bring the value of Travis into all of our hearts.”

“None of our lives will be the same with this void inside of us after losing Travis, but I hope your family feels deep pride in knowing that he was unconditionally loyal as a friend, never wavering through the challenge of to be a police officer, and was the best man anyone would ever meet,” he said.

Gibb said Gillespie was a passionate person who had a “heart of gold” and woke up every day rushing to help those in need.

Platon colleagues described Gillespie as an “infinitely unique” individual who was “toxicly positive and addictive,” he shared.

“Travis was fiercely humble. Travis was an inspiration. I looked up to Travis every day we were together,” Gibb said, calling Gillespie someone who taught him “true leadership by leading from the front and always showing strength for the team .”

He also said Gillespie taught him to be more light-hearted and to live more in the moment.

“I promise to embody your spirit and never let people forget the greatness you were. We lost a hero last week and I will carry the weight of your legacy forever,” he said.

He said Gillespie was the glue that held the team together and he left a “cavernous hole” when he moved on to YRP just before the start of the pandemic.

As a friend, he said Gillespie was by his side for every important moment of his life, including the bad times, and celebrated all his achievements as if they were his own.

York Regional Police Chief Jim MacSween visited the Gillespie family at their home last week and said he saw “firsthand how Travis inspired such love and how devastating his loss is to every member of (his) family.”

“When I spoke to his mother and father and brother Dan and other family members who were there, it was clear to me that this is a loving family, a caring family and a supportive family. With deepest sympathy, we all stand with you all,” he said. “Travis was clearly a special person. Others today have and will speak of his love for life, his love for his family and of course his YRP work family, his strength of determination and positive attitude and his outlook on life.”

MacSween went on to say that Gillespie was a “hard-working, dedicated, competent and compassionate” team member who “lighted up a room” with his smile and the way he cared for his colleagues, his community and those he loved .

Ontario Premier Doug Ford also attended the service, saying Gillespie was someone “admired by his colleagues” who “demonstrated a lifelong commitment to serving his community, as every police officer, firefighter, paramedic does when they sign up.”

Ford said his spirit of service and love for his community extends beyond his role as an officer, calling him a “wonderful, funny, loving man” who happily helped his neighbors and served the people of his community always with a smile on his face the lip and a positive attitude.

“We are all just so blessed to have people like Travis looking out for us. He will be deeply missed by those you know and we will be forever grateful for Travis, his service to his community and for the mark he made all of us, says Ford.

Gillespie was on his way to work around 6 a.m. on September 14 when the fatal collision occurred along Major Mackenzie Drive East.

Condolence bookswhich will be sent to his family, have also been posted in the lobby area of ​​each of YRP’s districts (#1 at 429 Harry Walker Parkway S. in Newmarket, #2 at 171 Major Mackenzie Dr. W. in Richmond Hill, #3 at 3527 Baseline Rd. in Sutton, #4 at 2700 Rutherford Rd. in Vaughan and #5 at 8700 McCowan Rd. in Markham) as well as at York Police Headquarters located at 47 Don Hollock Dr. in Aurora, for members of the public to sign.

To honor Gillespie, his family has established the Travis Robert Gillespie Martial Arts Scholarship Fund. Each year a child will be awarded a scholarship in his memory. Const. Gillespie is the second GTA police officer killed in the line of duty in the past week.