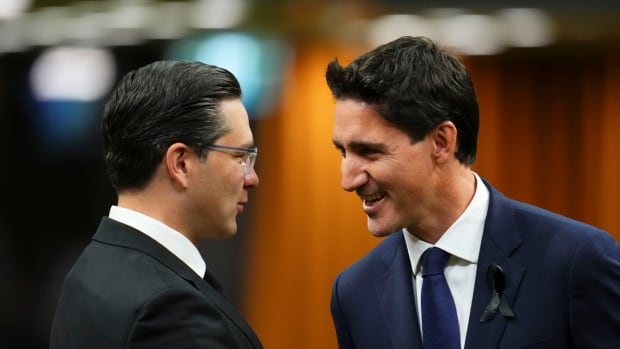 The first face-to-face showdown between Prime Minister Justin Trudeau and newly minted Conservative leader Pierre Poilievre is set to take place this week. But while political fireworks are expectedsome MPs are hoping to lower the temperature on Parliament Hill this autumn.

During the summer, CBC Radio’s The House spoke to several MPs on their drive home. A common theme that emerged from many of the conversations was the intense level of partisanship and division that sometimes grips Ottawa.

The high intensity of the partisanship can sometimes break out as a loud debate during question period.

“We need to do a better job as politicians of provoking that bad behaviour; we wouldn’t let a five-year-old say what they want while someone else is talking, so why are we letting an adult mock another adult?” said Laila Goodridge, Conservative MP for Fort McMurray—Cold Lake.

“I don’t think this is a time for games. This is not a time to try to be clever or use rhetorical tricks or try to pretend things or solutions are not. I think Canadians will see through that.” he said during a press conference where he set out the government’s priorities for the autumn.

“We have an opposition that is very aggressive. We have a government that doesn’t like to answer questions. So of course people are going to be frustrated,” he said. The House during a tour of his West Nova riding earlier this summer.

“It’s a vicious circle that we really as adults, as parliamentarians have to come to terms with. We can’t keep doing the same thing.”

D’Entremont credits Speaker Anthony Rota — a liberal — as a mentor of sorts on the difficult job. Much of it, he said, is about making the most simple connections: getting to know each other better.

“I think between Anthony and I, what we really need to do is bring these … government members together, [to] get to know each other,” he said.

Voters’ opinion on the tone mixed

Bloc Quebecois MP Nathalie Sinclair-Desgagné said whoever is in the chair should do more to shut down shouting matches that sometimes break out. But she said she believes some MPs may feel compelled to go rogue, so to speak, because their party’s most ardent supporters love to see it.

“In the long run, it would be for the public to stop giving credit to that kind of behavior,” she said.

Greens MP Mike Morrice, meanwhile, has heard constituents’ displeasure with the level of rhetoric they regularly see in Parliament. But he also worries that some other Canadians have chosen to use the same combative language they see being tossed around Ottawa.

“When I hear certain words used in the House of Commons – dictator, for example; [or] calling [Bill] C-11 censorship – these are the same words that I see popping up in emails,” he said.

Morrice has been outspoken about “infighting” between politicians, not just in televised question period but also within his own party.

According to Sinclair-Desgagné, the tone is more collegial at committee meetings. “Obviously we disagree on some issues, fundamental issues, but we tend to work together,” said Sinclair-Desgagnes, who, among other roles, is vice chair of the Standing Committee on Public Accounts.

However, she notes that it is much easier to maintain decorum among a dozen or so MPs compared to House clashes involving potentially hundreds of members.

Has the pandemic made things worse?

Bonita Zarrillo, NDP MP for Port Moody—Coquitlam, says it’s possible tensions have grown during the pandemic, as virtual sessions have necessarily eliminated much of the in-person interactions common between members in Ottawa.

She says that, however, it does not give everyone involved a pass.

“I struggle with it because some of what I feel is completely unacceptable,” she said.

She noted that having more women in politics could make a difference. “We’re not that tolerant of that jokey, locker-room-type cajoler,” she said.

Michael Coteau, Liberal MP for Toronto’s Don Valley East riding, recalled once having a discussion at a local restaurant with two Conservative members from Alberta. Their opinions and political values, he said, felt “night and day” compared to his own.

“To me, it’s almost like we’re speaking two different languages,” he said. “I just don’t understand where it’s coming from … but that’s their attitude.”

He argues that MPs, like Canadians, likely share certain “universal” beliefs that cut across party or geographic lines — that access to education and health care are universal rights, for example. He says he sees part of his job as maintaining a conversation between different points of view and acting as a “table builder.”

But he worries that it has become increasingly difficult to find common ground on many important issues – and that the problem is not just confined to Parliament Hill.

“I see that eroded every single day in politics, not just here in Canada, but around the world. You know, it’s to our detriment as a country.”