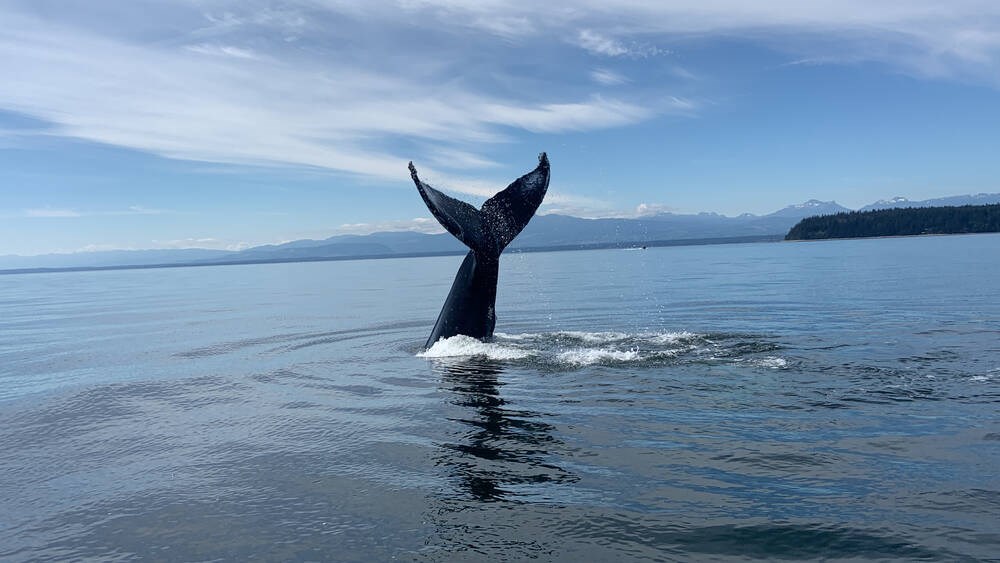 A Cumberland family out on their boat hoping to spot a whale off Vancouver Island this week got a lot more than they bargained for.

A humpback whale took a shine to the vessel and stayed within a few feet of the family boat for more than an hour.

About the size of a school bus, the humpback swam under and to either side of the family’s 19-foot boat, spinning around and flapping its massive tail and front fins, often seeming like “it was waving at us,” said Aleks Mounts, who filmed the encounter and posted it on his YouTube channel.

“It just wouldn’t leave,” said Alex Bowman, Mounts’ ex-wife and mother of their two sons, ages 9 and 13. “It looked like it was giving us high-fives.”

Mounts said it was a warm and calm day on the water Tuesday northeast of Campbell River when he spotted the whale about 100 meters away.

“I immediately killed the engine because I wanted to respect the rules about whales,” he said.

But the humpback dived and surfaced about a minute later right under their boat. He figured the whale would move on, but it stayed. The family was initially “frightened” by the giant creature, which could have flipped the boat out of the water, Mounts said.

He was reluctant to restart the engine for fear that the propeller would damage the humpback.

But the meeting seemed to turn friendly, pretty quickly.

The whale swam under the boat and along both sides, then spun and slapped its tail and flippers within inches of the boat. It would often appear and spray the family from its blow hole. “I can taste it … his breath is not bad,” Mounts said while filming.

He said the whale only made contact with the boat at one point with its billet fin, leaving some scratches and a slightly bent rail.

“He waved at us and knocked it hard into the water. He was doing these yoga moves. It was crazy, something none of us have ever seen,” Mounts said.

“I can’t believe how gentle it is and how deliberate it is.”

Bowman said: “We felt vulnerable in the boat, but it was a gentle giant who wanted to hang out with us. It seemed like he was more curious about us than we were about him.”

The whale was later confirmed as a juvenile male named Neowise. Humpbacks are identified by the patterns on the underside of their flukes, which are unique like human fingerprints.

Andrew Trites, director of marine mammal research at the University of British Columbia, said boat encounters with humpbacks are not common. But as the species continues a major comeback from the whaling slaughter of the early 1900s — and the extinction in the Salish Sea — he expects more close encounters to happen.

The whale may have been attracted to the boat’s depth finder, or fish finder, which uses sound waves to determine the depth of the water, Trites said.

The sound waves are similar to the vocalizations that whales use to communicate with each other, he said, and researchers are studying a possible link between depth finders and whales.

“It’s a high-frequency sound, a narrow beam that doesn’t hurt the whales, but they’re very vocal and like to communicate,” Trites said.

Although humpbacks in BC waters are here to feed, the juvenile whale could have understood the depth sounder as “a love song” and could have “enjoyed as part of a social interaction” hearing the sound waves, Trites said.

“Otherwise, a boat is an inanimate object,” he said.

Mounts said the depth sounder was on when he saw the whale and went off when he turned off the boat’s engine.

Trites worries that multiple encounters could pose “significant risks” to sailors. Male humpbacks typically weigh more than 10,000 kg, and they don’t often have control over their massive bodies and “broken” flippers.

“They’re huge, but they’re pretty clumsy,” Trites said, adding that boats could be destroyed and occupants put at great risk if a fly or flipper crashes.

He advises boaters to turn off depth sounders when they see whales, and if they are too close, try to move away to keep a safe distance.

Humpback populations in the North Pacific are increasing at a remarkable rate.

Naturalists aboard whale watching vessels reported 21 new calves last summer and fall — the largest nursery batch ever and nearly double the previous high of 11 identified the previous year, according to the Center for Whale Research in Washington.

Populations were reduced worldwide by as much as 95% until a final moratorium on harvesting the species for meat and oil was imposed in 1985 by the International Whaling Commission.

Humpbacks have been protected in Canada since 1966. Before then, according to a recent report by Ocean Watch, at least 5,600 humpbacks were harvested from whaling stations along the BC coast starting in 1908, decimating the population.

The Salish Sea is one of the last historic areas humpbacks have “reclaimed” since the days of whaling, which started about 20 years ago with a single whale. Others and their calves have followed.

Ocean Watch said the inland waters of the Strait of Georgia, extending south to Puget Sound, are likely where “a small and possibly resident population of humpback whales became extinct in 1909.”

As humpbacks begin to repopulate a historic summer feeding area in the Salish Sea, Trites said, it’s important that people develop a respectful relationship with how they interact with the species.

>>> To comment on this article, write a letter to the editor: letters@timescolonist.com