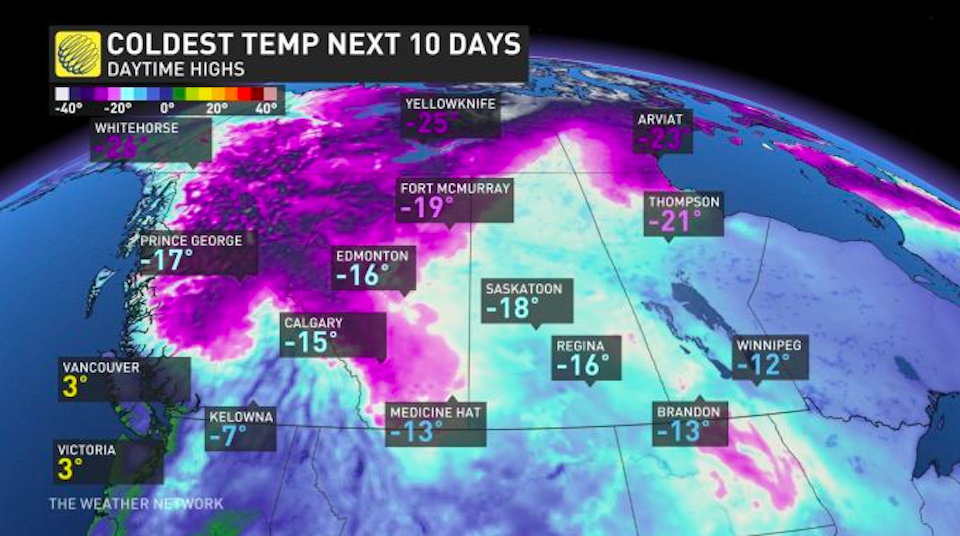 Metro Vancouverites could see snowfall several days in the coming weeks as temperatures are expected to dip early next month.

After experiencing one of those earliest snowfall everthere were several bright, sunny days in the city this November and even a few decidedly hazy.

And while the weather has been wet and slightly warmer so far this week, temperatures are expected to dip into the weekend — and they’re not expected to warm up anytime soon.

The Weather Network notes that western Canada saw this cold pattern earlier in November as arctic air poured into the region.

Now, two upper ridges are expected to “anchor the next cold wave right into early December, promising more snowfall and cool temperatures across most of the country,” according to a report.

A ridge of high pressure over Alaska is expected to bring a significant chunk of cold air to Canada from the core of a polar vortex currently located over eastern Siberia in Russia — and it’s not expected to clear any time soon.

“Another ridge wants to lock in the cold across the country. Signs of a blocking pattern over eastern Greenland are building, compressing the cold anomaly into Canada,” says The Weather Network.

Now that we’re further into November, the Weather Channel notes that storms churning up along the BC coast also have a higher tendency to drop snow levels to sea level.

How cold do the temperatures get in Vancouver?

The Weather Network predicts temperatures in Vancouver will drop to 3C during the daytime, marking a marked departure from temperatures closer to 10C this week.

A couple chances of snowfall expected Sunday and Monday evening.