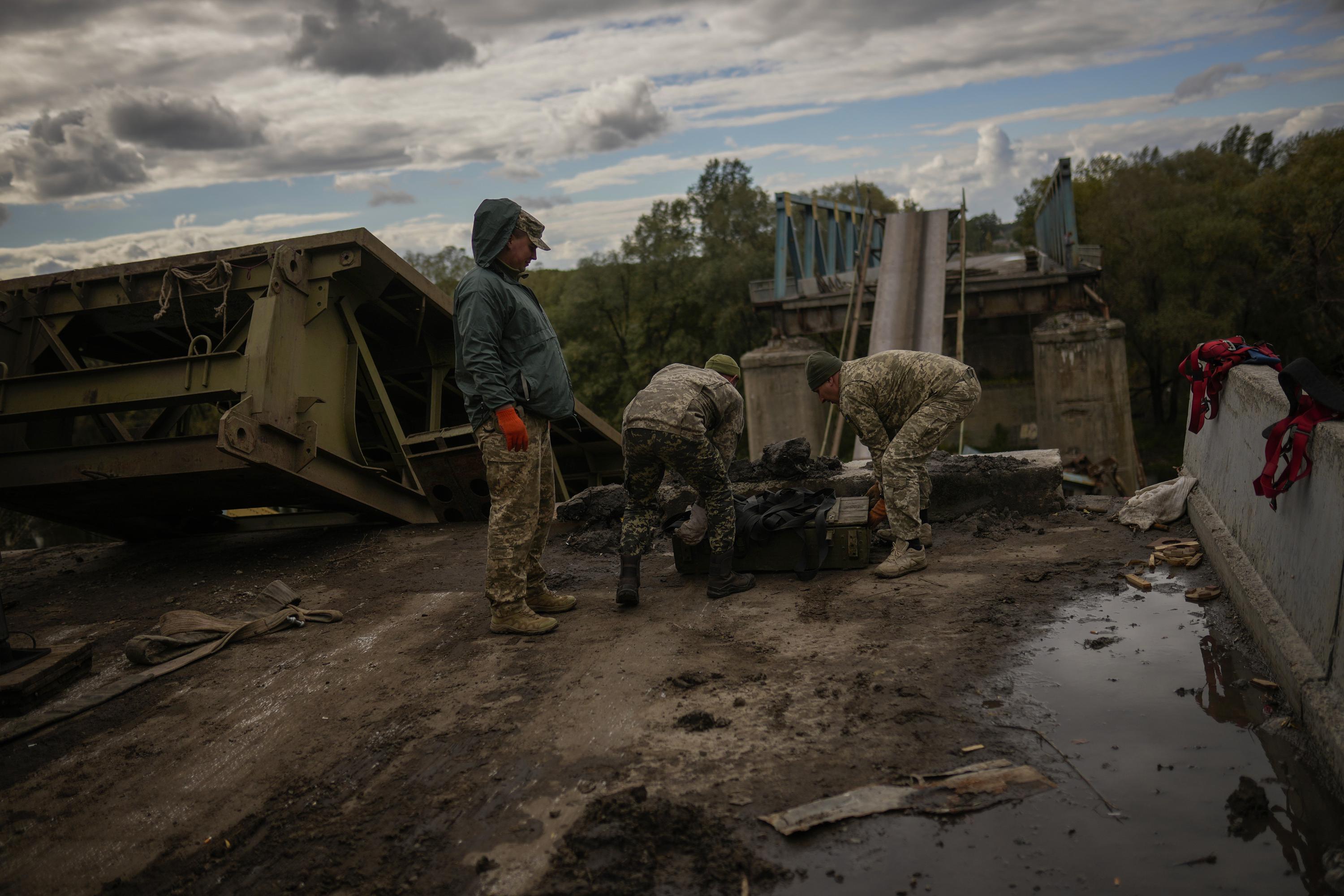 KYIV, Ukraine (AP) — Ukrainian forces made more progress in their counteroffensive across a broad front Monday, advancing in the very areas Russia is trying to annex and challenging its efforts to bolster its military with fresh troops and its threats of to defend built-up areas by all means, including nuclear weapons.

In their latest breakthrough, Ukrainian forces penetrated Moscow’s defenses in the strategic southern Kherson region, one of the four areas of Ukraine that Russia is absorbing.

Ukraine’s progress has become so evident that even Russian Defense Ministry spokesman Igor Konashenkov, who usually focuses on his own military’s successes and enemy losses, was forced to acknowledge it.

“With numerically superior tank units in the direction of Zolota Balka and Oleksandrivka, the enemy managed to penetrate deep into our defenses,” Konashenkov said, referring to two towns. He combined that with claims that Russian forces were inflicting heavy casualties on Ukraine’s military.

Ukrainian forces have been fighting to retake the Kherson region, in contrast to its breakout offensive in the northeast of the country’s second-largest city of Kharkiv that began last month.

As the front lines shifted, political theater continued in Moscow, with Russia’s lower house of parliament rubber-stamping annexation treaties for Kherson, Zaporizhzhia, Donetsk and Luhansk to join Russia. The upper house will follow suit on Tuesday as a culmination of annexation “referendums” orchestrated by the Kremlin last week – actions that the UN chief and Western nations have said are illegal.

Russia’s moves to incorporate the Ukrainian regions, as well as President Vladimir Putin’s efforts to mobilize more troops, have been made so hastily that government officials have struggled to explain and implement them. Putin admitted last week that some of the men called had been selected in error and ordered them sent home. On Monday, the question was even more fundamental: Exactly what areas of Ukraine is Russia trying to incorporate?

Kremlin spokesman Dmitry Peskov said Donetsk and Luhansk join Russia with the administrative borders that existed before a conflict erupted there in 2014 between pro-Russian separatists and Ukrainian forces. But he added that the borders of the other two regions – Zaporizhzhia and Kherson – are unclear.

“We will continue to discuss it with the residents of these regions,” Peskov said without elaborating.

A senior Russian lawmaker offered a different view. Pavel Krasheninnikov said Zaporizhzhia will be absorbed within its “administrative borders,” meaning Moscow will incorporate parts of the region still under Kyiv’s control. He said similar logic will apply to Kherson, but that Russia will include two districts in the nearby Mykolaiv region that Moscow holds.

Putin’s land grab has threatened to push the conflict to a dangerous new level, with him and his top officials warning of the potential use of nuclear weapons and ordering the partial mobilization of troops. It also prompted Ukraine to apply for fast-track NATO membership.

Ukraine has been pressing its counteroffensive in the Kherson region since the summer, relentlessly pounding Russian supply lines and making inroads into Russian-controlled areas west of the Dnieper River. The Ukrainian military has successfully used US-supplied HIMARS multiple rocket launchers to repeatedly hit the main bridge over the Dnieper and a dam that served as another main crossing. It has also hit pontoon bridges used by Russia to supply its troops.

The situation in the regional capital, also called Kherson, was so precarious that Russian authorities are restricting people from leaving, Ukraine’s presidential office said.

The Moscow-appointed Kherson regional chief, Vladimir Saldo, said Ukrainian troops were trying to advance on Dudchany along the Dnieper’s west bank to reach a key dam at Nova Kakhovka, but that Russian warplanes destroyed two Ukrainian battalions and halted the offensive. Saldo added that Russian forces repelled Ukraine’s attempts to penetrate the Kherson region from Mykolaiv and Kryvyi Rih. His claims could not be independently verified.

Despite successful attacks on supply lines, Ukraine’s offensive in the south has been less successful than in the northeast, as the open terrain exposes attacking forces to Russian artillery and airstrikes. Still, Russian military bloggers close to Moscow have acknowledged that Ukraine has superior manpower, backed by tanks, in the area.

A Russian-installed official in the Kherson region, Kirill Stremousov, said in a video that Ukrainian forces “have broken through a little deeper,” but insisted that “everything is under control” and that Russia’s “defense system is working.”

“Kreminna is the key to controlling the entire Luhansk region because beyond (the city) the Russians have no more defense lines,” he told The Associated Press. “The recapture of this city opens up operational space for Ukrainians to rapidly advance to the very state border with Russia.”

Zhdanov said Russian troops in this area had withdrawn from the Kharkiv region. In the Kharkiv region across the Oskil River 50 kilometers (31 miles) north of Lyman, Ukraine’s army reportedly liberated most of Borova. Local officials posted a video as they drove along newly reclaimed streets, waving the Ukrainian flag through a window.

Ukraine has also retaken a strategic eastern city, Lyman, which the Russians had used as a central hub for front-line logistics and transport. Lyman is located in the Donetsk region near the border with Luhansk.

Ukraine’s efforts to reclaim territory have vexed the Kremlin and prompted rare domestic criticism of Putin’s war. Tens of thousands of Russian men have fled Russia since the September 21 call. Many flew to Turkey, one of the few countries that still has air links to Russia. Others have driven off in cars and have created long traffic jams at the Russian borders with Georgia, Kazakhstan and Finland, among others.

Criticism of Russia from home and abroad has only spurred senior Russian officials to defend Putin’s actions more strongly.

Addressing lawmakers, Foreign Minister Sergey Lavrov accused the United States of gathering allies to counter Russia in Ukraine. He said it was like Nazi Germany relying on the resources of most of Europe when it invaded the Soviet Union in 1941.

“The United States has mobilized virtually the entire collective West to turn Ukraine into an instrument of war against Russia, just as Hitler mobilized the military resources of most European nations to attack the Soviet Union,” Lavrov said.

Follow AP’s coverage of the war in Ukraine at https://apnews.com/hub/russia-ukraine