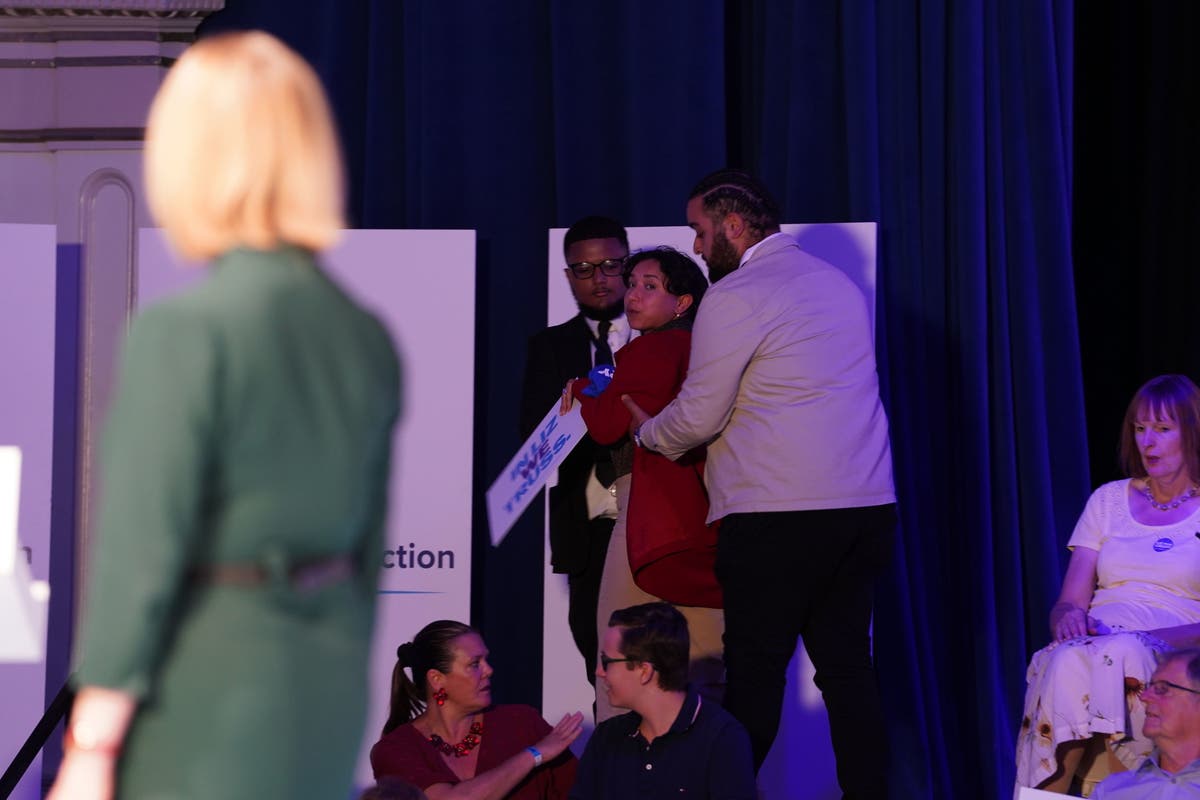 Tory leadership challenger Liz Truss vowed today to take action against “militant activists” after her speech to a campaign hustings was interrupted by hecklers.

Five environmental protesters joined an action by the Green New Deal Rising group at the event in Eastbourne, rising one by one from the audience to shout out to the incoming Prime Minister: “Liz Truss, you should be ashamed of yourself”.

A live stream of the hustings on the Conservative Party website was briefly halted as the protesters were removed from the chamber.

As the crowd chanted “Out! Out!”, the Secretary of State stopped his speech and said: “I think we have some infiltrators and I will wait until they are thrown out.”

And when she resumed her speech, Mrs Truss won applause from Tory campaigners by announcing that as prime minister she would “never ever, ever allow our democracy to be disrupted by unfair protests”.

But protester Fatima Ibrahim – the first to stand and confront the Foreign Secretary – said the group had disrupted the event because promises made by Ms Truss and her rival Rishi Sunak during the leadership campaign would make the climate change problem worse, rather than solve it.

Mrs Ibrahim said: “This is a critical moment for our country. Our next Prime Minister should respond to what the majority want, which is good wages, secure jobs and a safe climate.

“But Liz Truss and Rishi Sunak are clogging the airwaves with policies that will make things worse, not better.

“Energy bills will rise to over £3,000 a year and nothing they have announced will come close to putting money back in people’s pockets. We disrupted the Houses tonight to send a clear message that we are the majority , and we rise.”

“I want to make sure that militant activists like Extinction Rebellion are not able to disrupt ordinary people who work hard and do the right thing and go to work.

“And I will never, ever allow our democracy to be disrupted by unjust protests.”

Later, another protester interrupted a question and answer session with Tory members and went on a Green tirade at Mrs Truss.

The leadership contender listened for a moment before realizing she was once again the target of the protest, telling activists: “I just take it as a compliment that I’m so popular with Extinction Rebellion.”

Ms Truss insisted she was a supporter of free speech.

But she said: “What I think is wrong is when Extinction Rebellion activists stick to trains and disrupt commuters going about their business.

“I’m fine with peaceful protests, but the situation we had in Parliament Square, with a whole bunch of people camped out in tents for weeks and weeks on end, is not the same as a peaceful protest.

“I believe in freedom to do as you please, as long as you don’t harm others. That’s the basic concept for me.

“But I think we’ve reached a stage in our society where there’s deliberate disruptive activity that’s not just about peaceful protest, it’s about trying to disrupt democracy, trying to disrupt people’s everyday lives. I think is a problem.

“There is a balance to be struck, but one person’s freedom should not mean other people suffer misery.”

Mrs Ibrahim said: “Liz Truss is leading the polls and is likely to be the next Prime Minister, but she has nothing credible to say in response to the cost of living crisis and the climate crisis.

“Britain has just experienced record heat waves and energy giants are raking in billions in profits while people are pushed further into poverty every day, prices rise and wages stagnate.

“As young people scared for our future, we desperately need a Green New Deal and political leadership to meet this moment of crisis rather than this sideshow.”