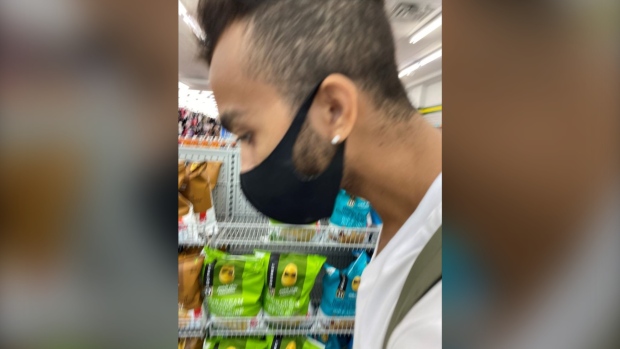 Toronto police have released images of a suspect wanted in connection with an indecent act committed at a downtown store last month.

Police said the incident happened at a business near Yonge Street and Brookdale Avenue, just north of Lawrence Avenue, on the afternoon of July 12.

A man entered a business and later allegedly followed a woman and her daughter inside, police said.

While the woman was waiting in line to pay for her items, the man allegedly exposed himself to her.

Police said the man then fled the store and was last seen north of Yonge Street.

On Saturday, police released a description of a suspect. He is described as between 18 and 25 years old, with a thin to muscular build, short black “faded” haircut and a tattoo on his upper inner left arm.

Police said he was wearing a white t-shirt, green pants, a black mask, black and gray running shoes and carrying a green backpack.