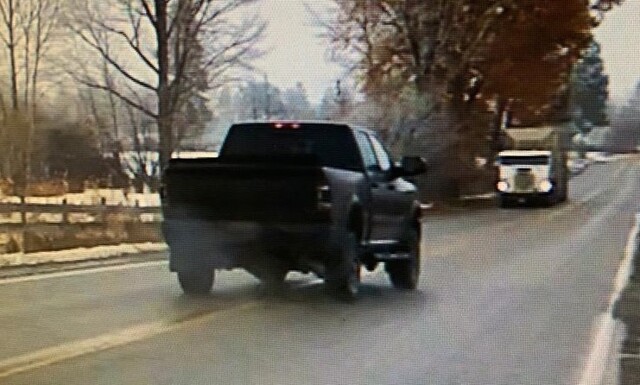 Police closed the Coquihalla Highway Wednesday while officers searched the area for alleged car thieves believed to be armed.

While the press release did not provide details on the circumstances surrounding the stolen vehicle, the Uniform Band Enforcement Team and the Combined Forces Special Enforcement Unit of BC were involved in the investigation.

When officers attempted to pull over the stolen vehicle, the driver took off and drove down a side road off Coquihalla, near the Juliet Bridge. The truck got stuck in the Coldwater River and the three occupants ran from the scene.

Tik Tok user Kurtis Brown posted a video Wednesday afternoon of the truck stuck in the river with several officers surrounding it. He has since removed the video.

Sgt. Manseau says witnesses reported that one of the suspects appeared to be carrying a firearm, prompting a large RCMP response, including from the emergency response team.

A female suspect was located and arrested shortly after fleeing the truck, but two other men remained at large.

“Out of an abundance of caution, the highway was closed for several hours while we searched the area for these suspects,” said Sgt. Josh Roda of the Merritt RCMP.

“Without knowing their identities or their intentions and reports indicating they were armed, we felt it was best to keep all members of the public off the scene.”

More than a dozen construction workers at a nearby TransMountain pipeline job site were evacuated and the entire Coquihalla Highway was closed to motorists.

After several hours of searching, officers located the remaining two suspects around 18.00. Sgt. Manseau says they were “arrested without incident” and transported to the Merritt RCMP detachment.

Sgt. Manseau said he did not know if any firearms were recovered when the suspects were arrested. It is not clear if charges have been filed at this time.

Police have determined the truck was stolen in Coquitlam and the license plate on the truck had been stolen in Langley.

“We are aware of the online speculation about the identity of these suspects. Although we are in the initial stages of this investigation, there is no indication that these suspects are related to any recent high-profile events in the Lower Mainland or Merritt,” said Roda, Sgt. .

Sgt. Manseau thanked a commercial truck driver who initially located and reported the stolen truck to the RCMP, along with the TransMountain employees who followed police directions and the public to deal with the closed highway.