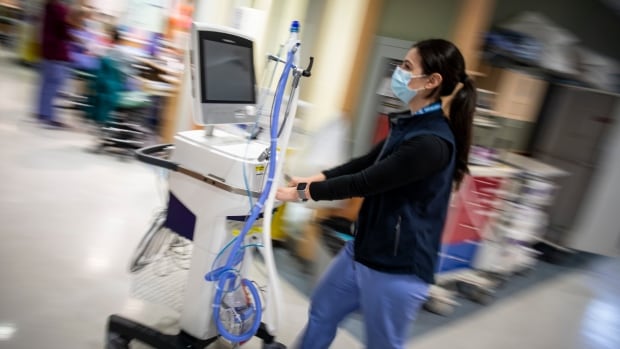 A trio of respiratory illnesses show no signs of letting up in Alberta, raising concerns about the potential for an even more dramatic increase as people begin to gather for the holidays.

As flu, RSV and COVID-19 continue to overwhelm pediatric hospitals in the province, health officials warn the worst may be yet to come.

“The concern I have right now is that we’re not seeing any significant decline in … viral spread at the moment,” said Craig Jenne, associate professor in the Department of Microbiology, Immunology and Infectious Diseases at the University of Calgary.

“Judging by the patterns we’ve seen in eastern Canada, it’s unlikely we’ll see a significant drop in viral transmission before the holiday season. And if we continue to gather in large groups and events where, for example, there’s no is masking indoors. , that will further drive viral spread.”

Data published by the Public Health Agency of Canada shows, for the week ending Nov. 12, Alberta had “widespread” flu activity, and it recorded higher than any of the other provinces or territories reporting data at the time.

1/3 Respiratory Virus Update 🇨🇦: Influenza and respiratory syncytial virus (RSV) activity remains above expected levels for this time of year. Nationally, the laboratory test positivity rate is close to 8% for #RSV and close to 16% for #flu. https://t.co/XcSGV5Nksv

What health experts have worried about right now is the timing.

“If this doesn’t start to plateau or slow until we get into these holiday seasons where there are more social activities, we’ve seen in previous winters with COVID that the holidays typically drive a post-holiday spike. And we have to be careful about , that we have the capacity to deal with … all three of these respiratory infections,” Jenne said.

“We continue to see an early and steep increase in influenza activity in Alberta with 355 hospitalizations due to influenza since the end of August… Of those hospitalizations, 98 have been in children under the age of nine,” spokesperson Kerry Williamson said in a statement provided to CBC News.

With no reprieve in sight, health officials are ramping up their messaging efforts.

“In the last few weeks we have seen a large increase in cough and fever illnesses in our schools,” it said.

“We are concerned that this flu season will be more severe than we have seen in years and that illness will continue to disrupt school, sports and upcoming holiday gatherings.”

The doctors noted that Australia, which may be a predictor of Canada’s flu season, had a severe respiratory virus season, with children under 16 accounting for the majority of the country’s flu hospitalizations.

“While most children who get the flu will recover without complications, some children may become very ill and require treatment in the hospital… H3N2, the hitherto common flu strain in Alberta, is known to cause more severe illness in young children and seniors. The flu vaccine being used this season provides protection against the H3N2 virus.”

Joffe and McDougall pointed to masking as another important precaution parents can take.

“The use of a high-quality, well-fitting mask is encouraged, especially in crowded indoor settings. Wearing a mask can help reduce your risk of becoming ill and help protect others from exposure. Individuals should be supported regardless of their choice of masking or not.”

Dr. Jia Hu, a Calgary-based public health physician, expects the situation is likely to get worse before it gets better.

“People can take steps … that will blunt the top of these things,” he said.

“We don’t have a vaccine for RSV, fair enough. But we do for flu and COVID. So make sure you get it. If you feel the slightest desire [or] concern, it’s OK to wear a mask in an indoor public place,” he said.

When it comes to gathering, Hu’s key message is to stay home if you’re feeling unwell.

“I would certainly hope that people … take these steps. They’re kind of a no-brainer step, in my mind.”