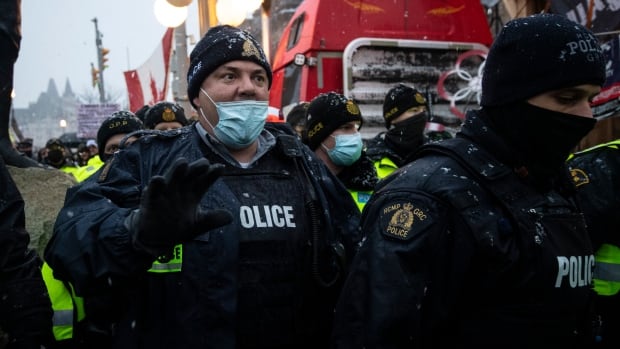 The RCMP wanted to keep the emergency law in place for several weeks and was concerned revoking emergency powers would “send a strong message to protesters,” the inquiry reviewing the government’s decision to invoke the never-before-used legislation heard Thursday.

In speaking notes prepared for RCMP Commissioner Brenda Lucki for a Feb. 20 meeting with federal cabinet ministers and senior security officials, she argued against revoking legislation that had given officers emergency powers.

“As it relates to Ottawa and Ontario, there is an operational need to maintain access to these powers to ensure we can finish what we started and prevent any retrenchment. Even in the next 2-3 weeks,” Luckis says notes.

“If you revoke or withdraw the action now, it will send a strong message to the protesters.”

Lucki’s notes say the powers the emergency law gave police — such as the ability to force tow trucks to move vehicles, to freeze certain bank accounts and to impose a ban on bringing minors into protest zones — had been helpful.

According to the notes, Lucki feared the protesters would return.

“Some protesters are inside the red zone in hotels and have indicated to the police that they will not leave,” the document says.

“It’s just too early to lift the emergency law.”

Brian Clow, one of Prime Minister Justin Trudeau’s deputy chiefs of staff, said Thursday that was the RCMP’s opinion right up until the point when those emergency powers were revoked on Feb. 23, nine days after the government triggered the emergency law.

“The RCMP believed the powers were critical,” he testified.

Katie Telford, Trudeau’s chief of staff, told the inquiry it was important for the prime minister to ensure emergency powers do not remain active “one minute longer than absolutely necessary.”

The commission has already heard how, the night before the action was invoked, Lucki told Public Security Minister Marco Mendicino’s chief of staff that she did not believe the police had yet used all available tools.

Lucki has since publicly said she supports the government’s decision to invoke the Emergency Act.