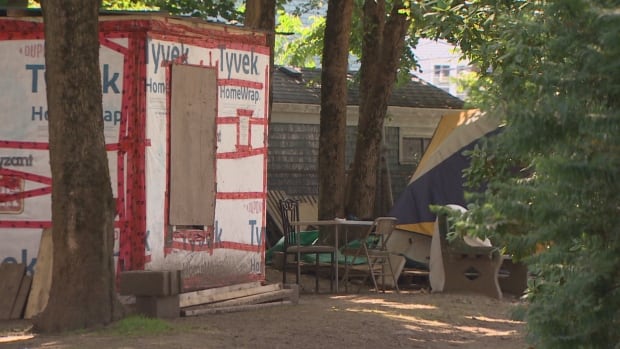 Residents and volunteers in Halifax’s west end say they are on edge after the council asked police for help to remove people experiencing homelessness from a tent camp on Chebucto Road.

In a statement published Thursday evening, the municipality said it submitted an official request for assistance from Halifax Regional Police on Wednesday and that enforcement action is now up to the police.

Council held a special meeting Tuesday about homelessness in the city and specifically what’s happening in Meagher Park, also known as People’s Park, where people have been staying since last summer.

Many councilors said the situation at the park cannot continue, echoing concerns from neighbours on violence, verbal threats and health and safety issues.

Bruce Wilson, who lives on Chebucto Road, said in the days since the meeting he’s noticed more activity in the park, “almost like a ramp up and preparation for things.”

He said an outside group of protesters has emerged.

“Within the past few days, there has been an increase in activity… [It] acts as a protection of the park, almost a fortification of it. We see a pallet barricade up one side on Dublin Street,” he told CBC Radio’s Information morning.

The issue of people co-opting the situation in the park for their own political agenda was also raised by several councilors during this week’s meeting.

Victoria Levack, a volunteer with the PADS Community Advocacy Network, said protesters unaffiliated with her group or the park’s residents began showing up in July, usually in the evenings, “to stir things up.”

“They asked if we wanted their help. We said no thanks and they came anyway,” Levack told CBC Radio’s main street. “And then we didn’t so nicely say please go away. You’re not welcome here. We don’t support your values ​​… and they won’t leave.”

The police state that an illegal fire has been set

Halifax Regional Police said in a statement Thursday night that “efforts continue to be made to allow residents to voluntarily vacate and remove their belongings from municipal property.”

Police said there was an incident this week where an illegal fire was set and “park residents” tried to prevent firefighters from putting it out.

“We have an obligation to protect the public safety of all involved – and encourage efforts to ensure a safe exit,” HRP said.

But Levack said threatening people experiencing homelessness with police action is not the answer. On Thursday, she said police cars were driving back and forth surveying the park.

“Policing people in tents and shelters is wrong, especially when there are no better options. We cannot police our way out of a housing crisis,” PADS wrote in a statement this week.

Wilson, meanwhile, said he sees no other option but to bring in the police.

“It affects us negatively, emotionally. [We’re] concerned about our safety, families safety, property safety and it’s been a year and it’s been very stressful, he said.

While Wilson said he understands that some of the new people at the park are not affiliated with residents or volunteers, he is concerned about the behavior he has witnessed over the past several months.

There is also concern among some that police involvement could escalate and become a repeat of what happened a year ago.

“That is set up again based on what the city council says [about] use by the police. It worries me a lot,’ he said, adding that no formal investigation of the municipality’s supervision of the police’s efforts that day has taken place.

At last count, more than 600 people experienced homelessness in the Halifax region.

During the meeting this week, many councilors praised the city and the province for the work that has been done to build modular units in Halifax and Dartmouth and approve specific areas for tent sites.

But Rashid said these solutions clearly don’t work for everyone.

“There’s been talk since last year that the city and the province are working together, but a lot more needs to be done to solve the problem,” he said.

Halifax Regional Council held a special meeting to discuss “closing” the camp at Meagher Park, where people have been living in tents since last summer. We hear from Asaf Rashid, a lawyer representing protesters who were arrested in a similar eviction last summer.