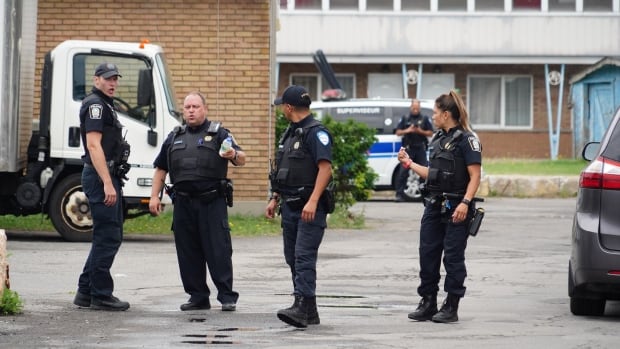 The suspect in this week’s three fatal shootings in and around Montreal was released from a mental health facility even though a psychiatrist deemed him a “significant risk to public safety,” court documents show.

Those documents, which were obtained by Radio-Canada, also show that Abdulla Shaikh had previously been diagnosed with schizophrenia.

Following the recommendations Administrative Tribunal of Quebec — which deals with cases related to mental illness – ordered Shaikh to be released in March from a psychiatric ward under conditions.

The release conditions were imposed to ensure health authorities could monitor Shaikh’s progress.

At that time, Shaikh’s condition had been improving, the judgment reads. But the court said he could resort to “unpredictable and aggressive” actions if his mental illness worsened.

“Without a legal and therapeutic framework, his situation would worsen and cause a return of the context for dangerous [behaviours],’ reads the court ruling.

The 26-year-old man was shot and killed Thursday morning during a police operation in Montreal at a motel in the city’s Saint-Laurent district.

Police believe the 26-year-old man fatally shot two men in Montreal on Tuesday night and another the following night in Laval.

Shaikh had several run-ins with the law, including allegations of sexual assault, assault causing bodily harm and uttering threats, according to the court documents. In 2018, he was arrested at the Montreal airport for trespassing several days in a row.

SEE | Read more about the events leading up to Thursday’s police shooting:

Quebec’s independent police watchdog is investigating after Montreal officers shot and killed a suspect believed to be responsible for three apparently random shootings around the city.

In one instance, court documents show, Shaikh was in a restricted zone at the airport and burned his passport with a lighter. In November of that year, he was found not criminally responsible for his actions.

Soon after, he was diagnosed with schizophrenia.

As part of his release, the court ordered Shaikh to respect the following conditions: live in a home approved by the hospital, follow the recommendations of the team treating his condition, refrain from using drugs, keep the peace and submit to urine tests when asked for it. . The March decision also authorized the Laval Regional Health Board to tighten the conditions of his release.

The written order ends with a mention that Shaikh’s case would be reviewed and a new hearing would take place within the year that followed.

Radio-Canada spoke to Shaikh’s brother, who acknowledged the suspect’s mental health issues but also said he does not believe the 26-year-old was responsible for this week’s fatal shootings.

According to preliminary information provided to the Quebec police watchdog, the Office of Independent Investigations (BEI), Montreal police officers were confronted by a man with a firearm during Thursday’s operation. Shots were fired and Shaikh died on the spot.

His death means there are now two investigations: one looking into the three fatal shootings on Tuesday and Wednesday, which has now been taken over by the Sûreté du Québec’s major crimes unit, and another that will focus on the actions of the Montreal police (SPVM) during the operation that killed Shaikh.

On Thursday, an SQ spokesman said a large part of the investigation is trying to establish a motive for Tuesday’s and Wednesday’s killings.

Suspect should never have been released, say victim’s loved ones

For many, the court’s decision raises questions about how Shaikh’s mental health was evaluated before and since his release in March.

The family of Alexis Lévis-Crevier – the 22-year-old who was killed in Laval on Wednesday – is struggling to understand why Shaikh was allowed to be released.

“You would think that the person who had his file in their hands should have seen that he was not fit to be outside,” said Roxanne Lévis-Crevier, Alexis’ older sister.

On Friday, Mélissa Beauchamp, a friend of the family, stopped by a temporary memorial set up near the scene of the shooting.

“He wasn’t evaluated properly, if you ask me,” Beauchamp told Radio-Canada, adding that her friend’s death was “unfounded.”

Both Beauchamp and the victim’s sister described Alexis as loving and generous.

“Every day we wrote to each other,” his sister said. “So I’m really going to miss his presence. I feel it, but it’s not physically there. My head knows it, but my heart won’t admit it.”

In a statement, the regional health board for Laval, which oversees the hospital that administered Shaikh’s case, expressed its condolences to the families of the victims. It said it could not comment on the suspect’s case for confidentiality reasons.

A spokesman for the health authority said, generally speaking, its responsibility is to ensure that a patient complies with the conditions set by the court.

François Legault, the lawyer who represented Shaikh at the March hearing, said he wonders if police acted hastily in shooting and killing his client.

In addition to offering thoughts to the three victims in Montreal and Laval, he said he was “shaken” by the news of Shaikh’s death.

“I ask myself a lot of questions. I don’t have the answers. I hope to get them one day and I don’t know if [police] The operation was carried out a little too quickly,” the lawyer said.

“We tried all measures to establish a level of communication that was adapted [Shaikh’s] situation?”

Legault described the decision to release Shaikh under conditions as a “tolerable” risk based on his progress.

“That’s what our job is — it’s accepting the risk,” the lawyer said. “Every day we make decisions without knowing what will happen next, but [they’re] based on the data in front of us.”

Legault also acknowledged that he had not spoken to his client since the court’s order.