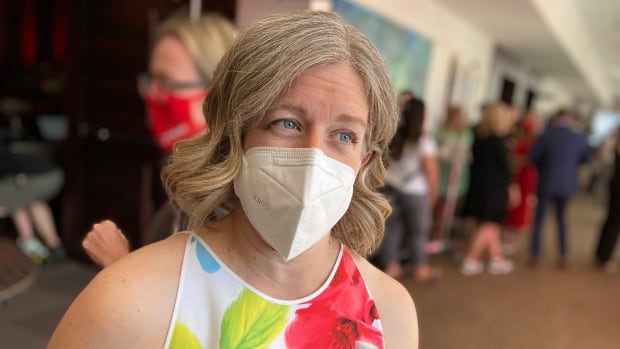 In a historic victory on Saturday, Susan Holt has been elected as the new leader of the New Brunswick Liberal Party.

She is the first woman to win the party’s leadership in the province.

She won on the third ballot with 51.67 percent of the vote. Former Liberal MP TJ Harvey was the runner-up.

Holt will lead the party into the next election against the ruling Progressive Conservatives now led by Prime Minister Blaine Higgs.

The former business executive and one-time adviser to former prime minister Brian Gallant pitched herself as someone who would bring a fresh approach to politics, a theme she repeated in her victory speech.

“They want to see something different. We can be the party that leads change for a new politics in New Brunswick that is transparent, authentic, empathetic and collaborative.”

In part, Holt’s victory was based on being the second or third choice of two of the other candidates.

The party used preference voting, meaning members who voted over the past week ranked their first, second, third and fourth choices for leader. For a winner to be determined, a candidate required 50 percent of the vote.

Former minister Donald Arseneault and current MLA Robert Gauvin were the others on the ballot.

I am humbled to have earned your trust to lead the Liberal Party in New Brunswick. I have said clearly that I want to change the way we do politics. And I’m so grateful that you do too. pic.twitter.com/JM2jcwJl7g

During the first round of voting, Harvey had 33.9 percent, Holt had 32.12 percent, Gauvin had 19.76 percent and Arseneault had 14.22 percent of the points awarded in the party’s weighted voting system.

Arseneault was dropped from the ballot and the votes were redistributed.

Harvey received 39.58 percent in the second ballot, while Holt had 36.76 percent and Gauvin had 23.67 percent. Gauvin fell off the ballot.

Holt said she had “a lot of conversations” with people who chose Gauvin or Arseneault first but were also interested in her as a potential leader.

Despite his defeat, Harvey said he was optimistic about Liberal prospects, although he would not commit to being a candidate at the next election.

“It’s certainly not the result we were hoping for,” he said. “At the end of the day, we’re all still a family, and I think that’s been really healthy for the party.”

Harvey said his support during the first two rounds was about where his team thought it would be, but with two candidates eliminated at that point “it’s really hard to gauge where you think the support will be third vote could go.”

Saint John MLA Shirley Dysart briefly led the party as interim leader in 1985, but Saturday’s result is the first time party members have elected a woman to the role.

“Maybe we’ll see after the next general election that we’ll have another first time with a woman as prime minister,” Ouellette said.