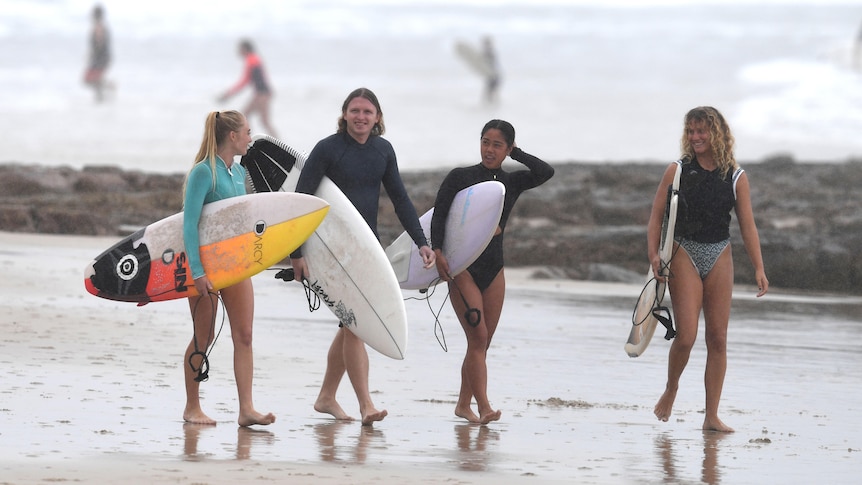 Whether you’re camping, hitting the beach, houseboating or 4WD, this summer will be wet and cool for some and hot and sunny for others.

Here’s what you can expect in each state and territory.

The Sunshine State hasn’t lived up to its name lately, and this summer looks like more of the same.

East Queensland has a fairly high chance of above average rainfall this summer in what is normally a wet time of year.

This includes Brisbane, where there is a 67 per cent chance of getting above the median of 355.1 millimeters of rainfall this summer.

Nights are likely to be warm in most of the state.

The biggest risks in Queensland this summer are likely to come from heavy rain, storms and tropical cyclones.

With La Niña lingering, there is a 74 percent chance of seeing one above average number of cyclonessi Queensland region this summer.

Tropical cyclones are highly variable, but the average is four cyclones per season.

But inside southern Queensland, fire potential is above normal this summer, with abundant grass fuel ready to burn.

New South Wales is expected to have above average rainfall, particularly on the eastern seaward strip of the Great Dividing Range.

But Andrew Watkins, head of long-range forecasting at the Bureau of Meteorology, warned that parts of southern New South Wales and the ACT that have seen flooding recently could also see above-average rainfall.

Nights are also expected to be warm in the west, but average to cooler than average in the northeast.

There is an above average fire potential for much of interior New South Wales as the recent abundant growth dries out over the summer.

It’s set to be a mild summer for Victoria.

The capital has a 76 per cent chance of more than Melbourne’s average rainfall of 131.2mm.

Daytime temperatures are expected to be cooler than average for eastern Victoria, but it could be warmer in the south and southwest.

The nights are expected to be warm.

Victoria is one of the most vulnerable regions in the world and the wet and relatively cool conditions mean the chances of large multi-day campaign fires are down.

But there is always a risk.

With the abundant growth triggered by all this rain, there will be plenty to burn if we manage to string together a few weeks of warm, dry weather.

Please don’t be lulled into a false sense of security and keep an eye out for warnings, especially towards the end of summer.

Tasmania is shaping up to be a mini version of the mainland this summer – dry in the west and wet in the east.

Western Tasmania has long been drier than normal as many of the cold fronts that normally bring rain have consistently stayed south of the island.

As a result, there is an above normal fire potential for the extreme southwest coast.

Despite there being a high chance of above average rainfall in Hobart, the days are still expected to be warm.

There is a 77 percent chance that this summer will beat the median of 22 degrees Celsius for summer maximum temperatures.

Western and southern Tasmania are expected to experience warmer days than average this summer, while the north-eastern daytime temperatures are expected to be closer to normal.

But the entire state can expect heat overnight thanks to warm oceans surrounding the island state, according to Dr. Watkins.

Slap bang in the middle, South Australia is looking at a goldilocks summer.

The climate models do not show a strong swing toward wetter or drier conditions for most of the state.

The southeast may be wetter than average, especially for December, but the forecast is not as convincing as it is further east.

Daytime temperatures also look fairly neutral for most areas, but nights are likely to be warmer than average for South Australia’s more populated regions.

The weather in SA may look average, but the amount of water coming down the Murray River certainly isn’t.

That latest prediction suggests the flow at the South Australian border is likely to peak at least 185 gigalitres per day in early December.

The current flow rate is just over 125GL/day.

Western Australia bucks the trend and looks dry this summer.

Precipitation looks average to drier than average for most of the state, including the southeast and Perth.

It looks set to be another hot summer, just like last year.

There is a 79 per cent chance that daytime temperatures will average more than the 29.7C summer median in Perth.

“Daytimes may be warmer than normal, especially in the southwest,” said Dr. Watkins.

“We expect a little more air to come from the continent instead of coming from the ocean.”

Nights look mostly warm, especially along the coasts, but parts of the southeast could see overnight temperatures below the median.

Western Australia’s latitude means it faces the risk of fires and cyclones throughout the summer.

Cyclones are highly variable, but the northwest cyclone region is looking at a 70 percent chance of more than the average five cyclones this season.

The western region overall has a 69 percent chance of seeing more than the average seven cyclones.

Parts of Western Australia have above normal fire potential this summer, including around and south of Perth.

It looks like the Northern Territory is headed for a standard summer.

“There is a small chance that we would actually be drier than average in the Top End, but only slightly,” said Dr. Watkins.

Further south, there is a small chance that precipitation could be above average, but again, it’s a much weaker push than for the eastern states.

Days and nights are expected to be warm over the NT.

There is a 79 per cent chance maximum temperatures will top the median of 32.9C in Darwin this summer.

Large areas of central Australia have above average fire potential this summer thanks to the abundant winter rains and growth.

The monsoon is expected to move down early this year, so with any luck the wet will be in full swing by Christmas.

There is a 61 per cent chance of the NT seeing more than the average three tropical cyclones this summer.