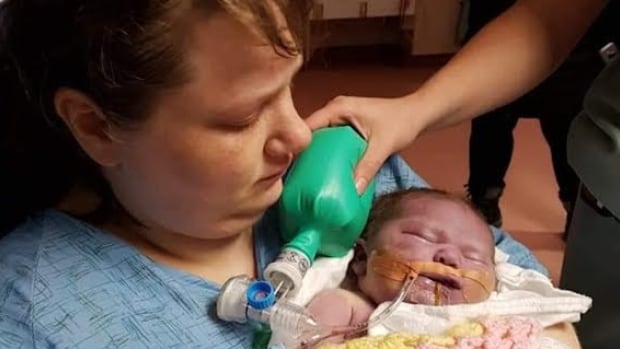 The mother of a child who died in 2019 is angry about the sanctions her obstetrician received after acknowledging mistakes she made during the birth.

Crystal Whalen said the sanctions for Dr. Krista Brown, who was announced last week, was not enough for the mistakes she made.

“It was a blow to the wrist for her and a blow to my face,” Whalen said.

In 2019, Brown was the doctor who took care of Whalen, 38, who had her first child, a daughter named Karlee.

The child’s heart rate was high for an extended period on January 18th. Karlee died shortly after she was born the next day.

Whalen says she asked for Karlee to be delivered by caesarean section on January 18, but that did not happen.

She says she thinks Karlee would have survived if she had been born then.

“Karlee should definitely have been born since tachycardia [rapid heart rate] was picked up. The doctor was aware of that. She was aware of the fetal heart rate, inability to capture contraction patterns and the patient’s discomfort level, and she largely ignored it. “

SE | Crystal Whalen says she still feels bitterness and anger over the death of her newborn:

After the death of her child, this mother is not happy with sanctions against obstetrician

Crystal Whalen tells CBC’s Mark Quinn that she still feels bitterness and anger over how Dr. Krista Brown handled the birth of her daughter

After Karlee’s death, Whalen said Brown did not speak to her and did not condole. She said it was left to her partner to tell her that their child was dead.

“Karlee’s father left the room, and then he came in again, and he said, ‘Our baby is gone,’ and I said, ‘No, that can not be true.’ I looked at him, and I said, ‘You’re kidding. ‘, and he just shook his head no.He was white as a ghost [and had] tears in the eyes. I never get that picture out of my eyes, “Whalen said.

Brown was reprimanded for negligence at a hearing at the College of Physicians and Surgeons in Newfoundland and Labrador on June 14.

An agreed statement of facts read during the hearing said:

“Dr. Brown acknowledges that her care for the patient, and in particular her lack of understanding of the importance of fetal cardiac tracking of patients’ infants on January 18, 2019 and the consequent need for emergency intervention, showed errors in judgment.”

Brown was reprimanded and ordered to pay for professional development courses on handling a delivery and patient communication. She was also sentenced to pay $ 10,000 for the case.

Whalen says that was not enough.

“We lost … me, Karlee’s father, our families, our friends,” she said. “But the one who lost the most was Karlee.”

She says there should have been restrictions on Brown’s permission to practice medicine.

Whalen says she has written to the college to say she is unhappy with the tribunal’s decision.

Brown has not responded to CBC’s requests for comment.