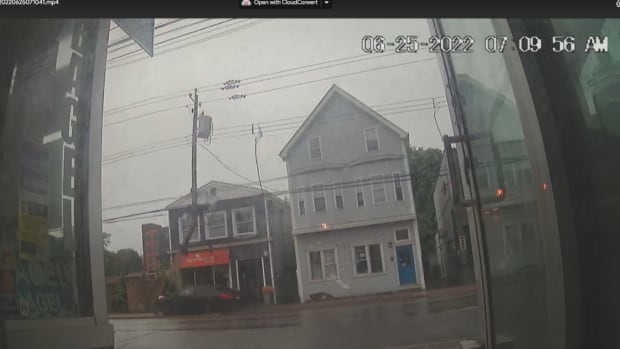 One person was injured when a vehicle ran into a supply pole and subsequently hit a light pole on Quinpool Road in Halifax just after 7 a.m. Saturday morning.

A press release from Halifax police said the 26-year-old driver was taken to hospital with non-life-threatening injuries.

The accident happened between Preston Street and Monastery Lane. That part of the street was closed for about an hour.

The owner of East Coast Bakery, located across the street from the supply bar, provided CBC News with footage from security cameras.

The video shows the car heading east along Quinpool Road and then driving up the sidewalk and hitting the utility bar.

It knocks the bottom of the rod out, causing a transformer to crash down the sidewalk. The remaining upper part of the rod jumps overhead with wires still attached.

The car then turns across the road towards Monastery Lane.

The video only shows the use bar that is hit and not the other bar mentioned in the release.

According to the press release, the driver is not expected to be charged in connection with the accident.