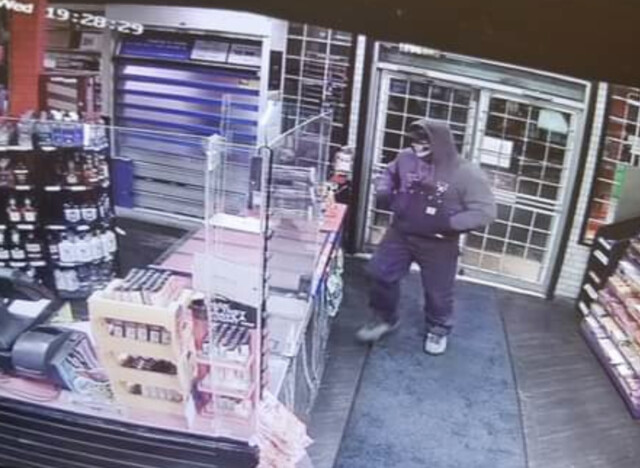 A suspect caught on security cameras at the Okanagan Falls Market Liquor Store.

Two armed robberies took place at liquor stores in Penticton and Okanagan Falls this week, both at gunpoint for cash.

Sgt. Jason Bayda, spokesperson for the Penticton South Okanagan RCMP, said police are investigating the incidents, which at this time cannot be confirmed to be related.

The first occurred Monday at 9:30 p.m., when a man walked into Gables Liquor Store on Martin Street in Penticton brandishing a black semi-automatic handgun while demanding money. The man fled the area with an unknown amount of cash.

He was wearing a black coat with the hood up, a black ski mask, black gloves and black jeans.

Then on Wednesday, a man walked into the OK Falls Market Liquor Store at 19.34 with a black gun and demanded money. The man fled the area with an unknown amount of cash and two bottles of Caroline’s cream liquor.

The man was wearing dark overalls, a dark hoodie, a dark baseball cap and a black ski mask.

“At this point we can’t confirm that the robberies are related, but it’s something we’re certainly looking into,” Bayda said.

“Being the victim employee of a robbery can be very traumatic. No employee should face these risks at work. We ask business owners to consider increasing the number of deposits they make during the day, limit the amount of cash, they store on-site, or if possible remove the option to pay with cash. This can help make your business a less desirable target. We also recommend that you avoid making your payments alone.”