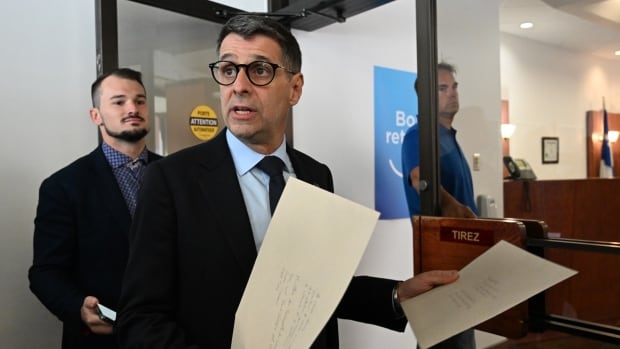 The leader of Quebec’s Conservative Party, Éric Duhaime, is distancing himself from a member of the party’s executive after he issued a statement claiming there was no genocide against indigenous peoples in Canada.

The party’s chairman of the political commission André Valiquette published the article in Quebec news last year, argued indigenous peoples largely benefited from the European colonization of their land.

“It is not racist to say that one civilization brings more than another,” Valiquette wrote in the article.

“It was also Western civilization, that curiosity about others, that helped indigenous peoples learn about their own history.”

When asked Saturday if he agreed with what Valiquette wrote, Duhaime said he did not.

“I don’t share [those views]they don’t represent party policy,” the leader said. “But he has a right to say that as a columnist.”

Valiquette serves as chairman of the party’s political commission, according to its website. Press secretary Cédric Lapointe said Valiquette is helping the party “with policies” as a volunteer, but would not reveal the extent of his involvement in the official party line.

“He supported his personal analysis of this issue, which should be promoted in a free and democratic society,” added Véronique Gagnon, the chair of the party’s communications commission, in an email.

Duhaime told reporters Friday that he was “too busy” to attend memorial services for the second annual National Day of Truth and Reconciliationwho does not want to postpone the meeting with the mayor of Quebec City with the election just days away.

It was declared a federal statutory holiday last year just days after Tk’emlúps te Secwépemc First Nation confirmed the discovery of about 200 potential burial sites, likely of children, at the site of a former residential school in Kamloops, BC

The Avenir Québec coalition was the only party to attend a truth and reconciliation commemoration Friday, when leader François Legault visited the site of a former residential school in Saint-Marc-de-Figuery, Que., in the Abitibi-Témiscamingue region.

Liberal Party leader Dominique Anglade said she would have gone to the march in Montreal but was told organizers preferred not to have any candidates present. Meanwhile, Québec Solidaire co-spokesman Gabriel Nadeau-Dubois said he wanted indigenous voices to take center stage that day, while Parti Québécois leader Paul St-Pierre Plamondon said scheduling got in the way.

Duhaime has also said his party does not agree with the day being a statutory holiday in Quebec, making it the only major party in the election on board with the Coalition Avenir Québec (CAQ).

“We have to work, we can’t take days off too often, we already have a lot of days off,” Duhaime told reporters on Thursday.