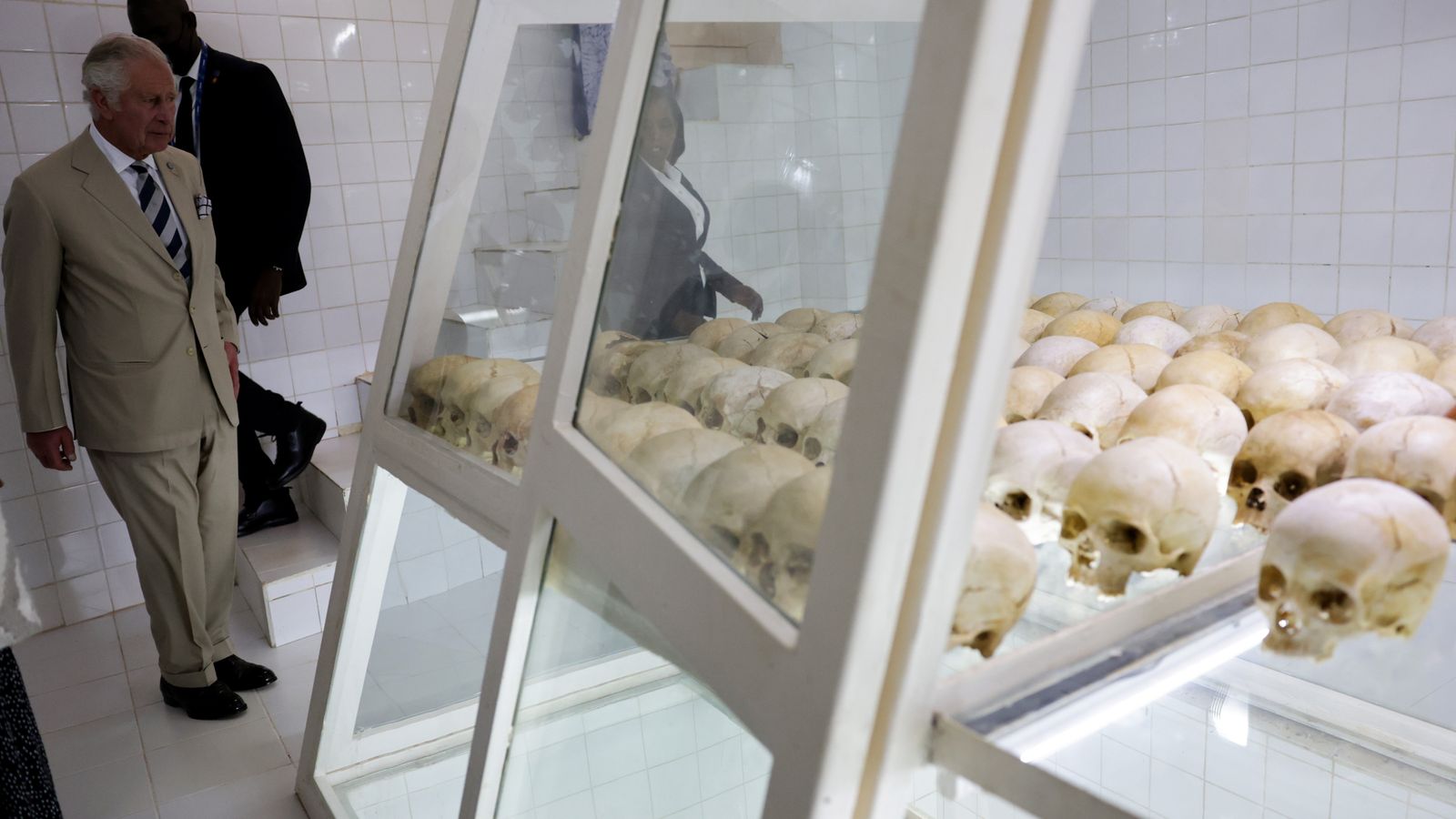 The Prince of Wales came face to face with the horrors of the Rwandan genocide as he called on the world to never repeat the acts of cruelty.

In a shaky start to a three-day visit to the country, Prince Charles saw rows of skulls from the victims of the 1994 massacre and heard the stories of survivors.

He visited the Nyamata Church Genocide Memorial, where more than 10,000 people were murdered over two days. On the site are the remains of more than 45,000 killed in the church area and the wider area between April 7 and May 14, 1994 buried.

After being shown a case of skull remains, Charles said, “This must never happen again, we will continue to remember that.”

Charles heard how the militiamen killed Tutsi men outside the church, who were trying to protect their families before turning on the women and children living inside.

“They threw hand grenades in and shot and then chopped many of them to death,” said Rachel Murekatete, the commander-in-chief, who showed Charles around and pointed to hundreds of holes in the church’s wooden roof caused by shrapnel from the explosions.

In 1994, up to one million people died during a 100-day massacre in Rwanda, in which members of the Tutsi community were killed by ethnic Hutu extremists.

In the past, Charles and Camilla have toured the Kigali Genocide Memorial and were shown the personal testimonies of families who donated pictures of smiling children and listed touching personal details about their loved ones.

The couple read carefully the comments about the murdered youths, and Charles responded by saying, “Terrible, it happens all too often.”

His wife replied, “What can humans do to humans?”

Genocide victims and perpetrators live side by side

Later, Charles, who during the day met Rwandan President Paul Kagame with his wife, hailed a reconciliation village as a “wonderful example to the rest of the world” after hearing how survivors and perpetrators of the 1994 genocide live side by side.

He toured the Mbyo village, built in 2005, where 384 Tutsis and Hutus successfully live and work together.

After listening to the stories of a Hutu perpetrator and a Tutsi whose entire family was killed, he said he was “full of admiration” that they had managed to overcome the past, adding: “It must have been so hard to be able to forgive these quite horrible horrors.

“It’s been tremendously encouraging to hear how you now view the situation solely as Rwandans, rather than Tutsi and Hutus, and that’s a wonderful example, I think for the rest of the world.”

Among those who greeted him in the village was Eric Murangwa, a former footballer who barely escaped death during the genocide and who encouraged Charles to visit the Village of Remembrance and Reconciliation when they met in Scotland in April.

The prince was clearly keen that the focus should be on reconciliation efforts after reports surfaced in the run-up to the Rwanda trip that he may have criticized the British government’s plans to send migrants to the country.

Reports indicated that he has privately said he is shaken by the new immigration policy.

This was confirmed by Clarence House Boris Johnson joins Charles for a cup of tea and a catch-up on Friday morning as the Prime Minister also flies to Kigali for the Commonwealth Government meeting.