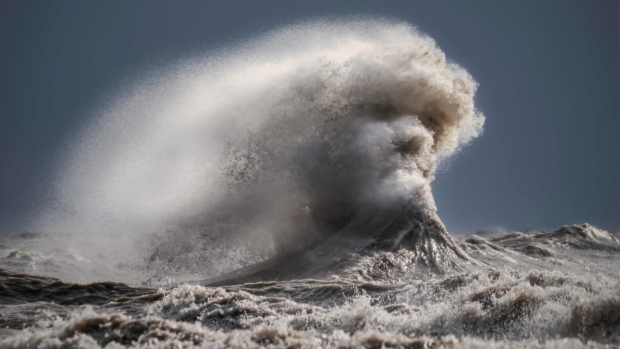 Of the roughly 10,000 photographs that Ingersoll, Ont., resident Cody Evans took of Lake Erie on Saturday during the lake effect storm, one looked like something conjured by Poseidon.

Evans told CTV News Toronto on Wednesday that he has been taking photos, primarily of wildlife and nature, since January 2020.

He said he often goes down to Lake Erie — in Port Stanley just south of London, Ont. – every time he looks, there will be strong winds, which is what the forecast said on Saturday.

Evans set up to shoot for a few hours that day – “It was pretty cold … I think it was -11 C or something” – and he couldn’t take pictures right away because of the snow.

“When it’s snowing, it’s hard because your focus will negate what you’re trying to focus on,” Evans said.

But then he says there was a 15-minute window where the sun poked through the clouds.

“I was watching the water, and when I see that waves are going to collide, I just take a burst of pictures,” Evans said, adding that his Nikon Z 9 camera can take 20 pictures per second.

“So you can get the whole sequence of what’s happening. Then I’ll go through it all [of] the pictures and I find ones I like and one happened to be the perfect face.”

According to Evans, some of the waves that crashed into each other on Saturday were more than six meters.

Last weekend, a lake-effect storm blew through parts of the province with up to 50 centimeters of snow covering areas such as Niagara, St. Catharines and Grimsby.

South of the border in Buffalo, NY, lies blizzard buried the metro area and hit the region so hard that three people died, according to US officials.