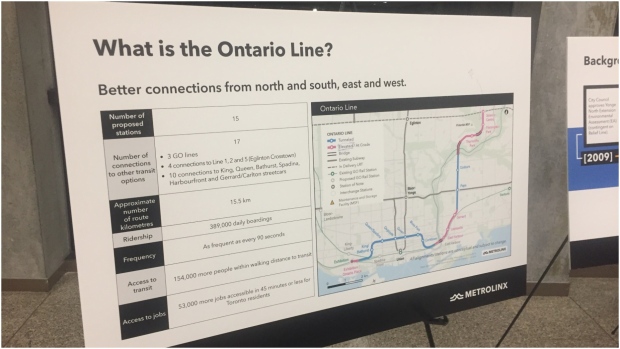 The cost of building the Ontario Line has nearly doubled from original estimates and could end up reaching more than $1 billion per hour. kilometer.

When the Ford government first unveiled plans for the 9.6-mile subway line in 2019, it pegged the cost at $10.9 billion and said it would be completed by 2027.

However, new documents released by Infrastructure Ontario this month show that two contracts totaling $15 billion have already been awarded for the project, which is now expected to be completed in 2031.

Request for Proposals (RFPs) have also been issued for two additional contracts to build the northern section of the line.

Infrastructure Ontario has previously suggested that these contracts, once awarded, will add between $1-2 billion each to the total cost.

That, in turn, could push the price tag as high as $19 billion.

“It’s quite a shock and should be a shock to people,” NDP Infrastructure Critic Jennifer French told CP24 this week. “I think it’s a realistic thing to talk about factoring in inflation, but to blame it, nobody’s buying it.”

One of the biggest factors driving up the cost of the Ontario Line is a contract awarded to a consortium of companies to operate and maintain the system for the next 30 years.

Metrolinx previously estimated the value of this contract at more than $2 billion, but when the contract was formally announced on 17 November its value had risen to 9 billion.

The second contract to build the southern section of the line from Exhibition Place to the west of the Don River was originally set at $4 billion, but came in at $6 billion when it was announced earlier this month.

In a statement to CP24, a Department of Transportation spokesperson said that “construction projects around the world are facing financial challenges with rising inflationary costs and supply chain shortages,” a phenomenon that is “not unique to the Ontario Line.”

However, French told CP24 that the Ford government owes taxpayers a fuller explanation.

She also expressed concern that the latest documents released by Infrastructure Ontario move the estimated execution date of the final project agreement back two years to 2026.

At present, it is unclear how it may affect the timeline for the construction of the 15-stop metro line.

CP24 asked the ministry if the completion date will be further delayed, but did not receive a response.

“I guess we’ll have to leave it to each individual’s best guess as to when it will actually be delivered because we don’t have the information behind the scenes that we would need (to make that decision),” French said. “You know, this is a big construction project. This is a massive infrastructure plan that we don’t really have any details on, and then when we get to see real numbers here, like in this update, I think we all have a reason to be very nervous that it is going to cost a lot of money and a lot of time.”

The Ontario Line is part of the $28.5 billion plan

The Ford government chose to make the Ontario Line the centerpiece of a $28.5 billion transit expansion plan for the Greater Toronto and Hamilton Area announced in 2019which effectively replaces another planned relief subway line project that was pursued by the City of Toronto.

In a statement, Department of Transportation spokesperson Dakota Brasier said the project, once complete, will “see nearly 400,000 passengers each day, reduce congestion on existing subway lines and place 57,000 jobs within a 45-minute transit commute to Toronto.”

She said it will also “generate more than $10 billion in economic benefits.”

But there is nonetheless concern over the rising price tag.

Toronto’s plans for a commuter subway line previously called for a smaller, eight-station subway station that would have ended at Pape Station.

Planning work was well underway on that line when the Ontario Line was announced in 2019.

“Ontario needs investment in public transit, but we also need transparency and accountable oversight from our government on these projects,” Liberal infrastructure critic Stephanie Bowman said in a statement. “The Conservatives need to come clean and tell Ontarians why the government’s signature transportation project is running way over budget and way past its original completion date.”