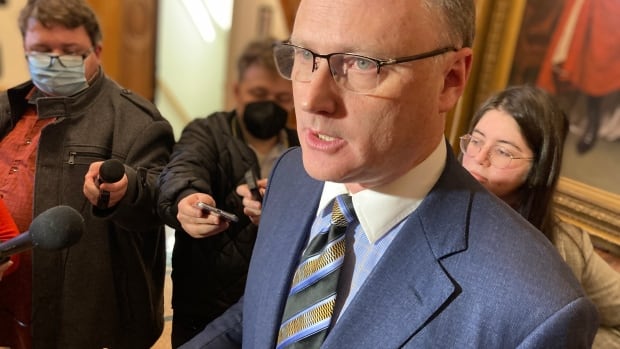 The Higgs government legislates stricter rules on how public sector strikes and lockouts can happen.

Under a bill introduced Thursday, unions would be forced to give 72 hours notice before going on strike.

The government will also give itself the power to replace designated essential workers who do not show up during a labor dispute, including with non-union replacement workers if necessary.

And it will have more leeway to change the work schedules of essential workers, something they are restricted from doing now under the Public Employee Relations Act.

A public sector union leader immediately labeled the bill an attack on workers.

“This is nothing short of taking away these workers’ right to have free collective bargaining,” said Stephen Drost, president of the Canadian Union of Public Employees in New Brunswick.

“This action … will certainly not improve labor conditions in this province.”

Labor Minister Trevor Holder said the bill was simply an attempt to bring “clarity” to the rules around essential workers, which he said the Labor and Employment Board had described as ambiguous.

“We have to be very clear about what this is and what it is not,” he said. “This is about designated essential services that are in place for the protection and safety of New Brunswickers in the event that there is a work stoppage.

“All we are saying is that we need to ensure that there is an ability to deliver these essential services based on what is agreed, either by both sides or by what the Labor and Employment Board determines.”

Drost said that during last year’s strike by CUPE unions there was no evidence of essential workers refusing to show up for work.

“If there’s a designated employee who can’t show up, all they have to do is talk to the union and we’ll fill that position. That’s always been our way of doing business. … We would never ever endanger the public.”

Holder would not say whether any essential workers refused to show up for shifts last year.

“We need to tone down the rhetoric a little bit, work together as New Brunswickers and at the end of the day see what it is,” he said.

“It’s designed to tilt the playing field in the employer’s favor,” she said.

“The Prime Minister has stated many times that he wants to do politics differently. Different seems to mean not respecting workers’ rights.”

Unions will be given the right to protest in their workplaces, something that is not allowed under the existing law.

But that change is being made because officials believe the current ban will eventually be ruled unconstitutional in the courts, and it’s easier to bow to the inevitable.

The other amendments favor the Progressive Conservative government, which has the majority needed in the legislature to pass the bill.

A membership vote on a strike mandate, which can now remain in place for years, would now expire after a year, forcing unions to vote again.

The two sides would also have more time to negotiate which workers should be designated as essential in a strike or lockout.

The Public Employment Relations Act regulates the relationship between employer and trade union in the four parts of the public service.

The opposition parties in the legislature criticized the bill.

“They are sending a message that they are getting ready for another round of confrontations,” said Liberal Labor critic Keith Chiasson.

Green Party leader David Coon said the legislation was “an attack on the working people in our public service. They impose restrictions that are unreasonable.”

Three CUPE locals have expired contracts and a fourth will have his collective agreement expire next month. Another two will expire next year, and three others will run until 2024.