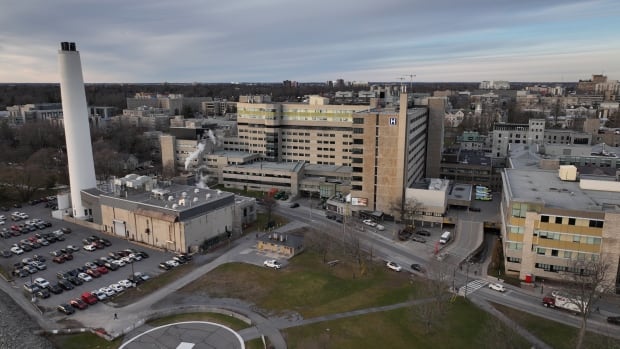 After months of attending Kingston General Hospital, a mother says she is concerned about a staff shortage in the hospital’s pediatric critical care unit after having to take on care duties for her sick child.

The three-year-old’s symptoms include seizures, which Ivimey said intensified in April this year after the family tested positive for COVID-19.

The two have spent more than 40 nights at the hospital between April and July, and Ivimey said she has witnessed a troubling shortage of staff during that time.

“I see nurses having to make decisions about which child to take care of first,” she said, adding that most days she counted four nurses to cover both the general inpatient pediatric ward and the critical care unit.

“It’s certainly never an ample amount of staff where you feel like … they’re adequately able to help you and your child.”

Vanessa Ivimey, whose daughter is often hospitalized because of a gene mutation that includes seizures, says she learned to use hospital equipment herself to monitor her child’s condition when nurses weren’t available.

Losing faith in the medical system

Ivimey said the lack of caregivers forced her to take her daughter’s care into her own hands.

After noticing that her daughter wasn’t getting the medicine she needed on time, Ivimey said she started bringing medicine from home.

She also decided to learn how to use the oxygen machine her daughter needed when she had seizures.

In one of those cases, she said she was buzzing for help and her daughter was “turning blue.”

“No one came … so I ran back into our room and I did what I saw the other nurses do. I laid her on her side, I turned on the oxygen machine. I put the mask over her face. I made sure she was breathe properly,” she said.

Ivimey does not blame the hospital staff or the nurses for these cases, but rather the medical system as a whole.

“To think that the children’s unit is unworthy of the same care that the other units get, it’s really hard not to get angry,” she said, adding that she feels compassion for overworked staff.

The experience has taken a toll on Ivimey’s mental health, and she said it makes it challenging to focus on her daughter’s care.

Kingston Health Sciences Center said the hospital is one of many across the country facing critical staff shortages in all units and programs, including pediatrics.

“This shortage is the result of a number of factors,” the hospital said in a statement, citing absenteeism, early retirement and staff leaving the healthcare sector as some of the reasons.

While the health center is actively recruiting to fill open positions, a shortage of trained health care providers across the province has made that difficult.

The hospital encourages anyone with concerns to contact its patient relations team.

Ivimey said she hasn’t done so because she’s worried her concerns will be misconstrued.

“They have phenomenal nurses and a social worker and administrative staff who are there and who try really hard, and I’m always worried that it’s going to look like I’m saying the staff aren’t doing their jobs,” she said.

Do something now, the union tells the province

Doris Grinspun, executive director of the Registered Nurses’ Association of Ontario (RNAO), said Ontario already lacked 22,000 registered nurses before the pandemic began, and the shortage has only gotten worse, putting nurses under higher workloads to make up for the shortfall.

“Unless something significant is done very, very soon, there may be a point of no return,” she said.

In a few months it may be too late.– Doris Grinspun, RNAO CEO

Grinspun said a survey by the RNAO indicates 75 percent of nurses are burned out, while more than half are considering moving away from patient care or leaving the profession altogether.

“That’s why families are put in a situation where they have to start doing some of the care because nurses have double, triple the workload,” Grinspun added.

For the association, these solutions include raising bonuses, lifting salary caps and speeding up the licensing process for internationally trained nurses to ease the pressure on the healthcare system.

Grinspun said hiring retired nurses to act as mentors would also help ease the burden, as well as bringing more nurses to support the hospital staff.

“Now is the time, because you know, in a few months it might be too late,” she said.