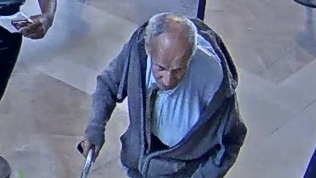 A 96-year-old man who disappeared several days ago has been found.

Michael Domoni was last seen on Monday, August 1 at 8:00 a.m., near High Park, at Bloor Street West and Keele Street.

Late Thursday, Toronto police said he bought a train ticket to Windsor and was believed to be in that area.

Domoni was located on Friday, August 5.

Toronto police are thanking the public for their help in locating this missing person.