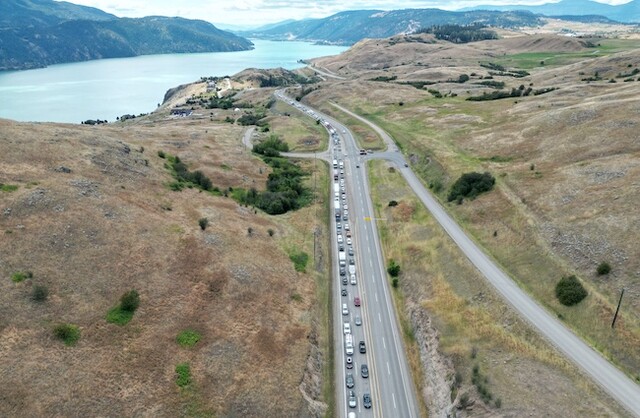 Motorists are reporting being stuck in a mile-long traffic jam for hours south of Vernon after this morning’s collision near the Vernon Cadet Training Centre.

While the accident happened around 8:30 a.m., the highway is still closed.

The northbound backup goes well past the dump at Birnie Road and those past the Bailey Road exit have nowhere to go.

The serious collision near the Vernon Cadet Training Center on Highway 97 appears to have involved a black SUV and white pickup truck.

The SUV is covered in blankets, while the pickup has extensive damage to the driver’s side and is missing a rear wheel.

The accident has closed Highway 97 in both directions, with traffic being diverted to Commonage Road.

Police say the area is expected to be closed for several hours.

A serious collision on Highway 97 near the Vernon Cadet Training Center appears to be fatal.

Blankets cover a black SUV that was involved in the two-vehicle crash, which appears to have been a head-on collision.

RCMP are diverting traffic on Hospital Hill at 16th Avenue.

A serious collision has closed Highway 97 near the Vernon Cadet Training Centre.

Just before 8:30 a.m., RCMP and emergency personnel responded to the scene of the multi-vehicle collision.

The motorway is closed to traffic in both directions due to the accident.

The closure is expected to remain in place for several hours while the investigation continues, Vernon RCMP advise.

Motorists are advised to avoid the area and use an alternative route.

Detours are being created and updates will be provided as they become available.

Castanet has a reporter on his way to the scene.