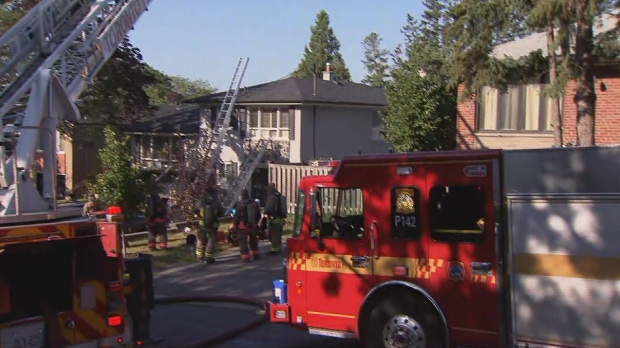 A man has died in hospital after being pulled from a fire that tore through a North York home early Saturday morning.

Shortly before 7:30 a.m., Toronto fire responded to a house fire at 14 Calais Avenue, near Lexfield Avenue and Richard Clark Drive.

The fire appears to have started in the basement.

“They arrived to find what we call a working fire. Saw the presence of smoke and flames. The first priority, always, for the crews is to get in and do a search and rescue,” Fire Chief Matthew Pegg told CP24 at the scene.

During their search, crews found a man in the basement, who was subsequently removed from the home.

The man, who is 61 years old, was taken to the hospital in life-threatening condition but was pronounced dead at the hospital a short time later, Pegg said.

“First and foremost, we extend our most sincere condolences to the family, friends and all those affected by this tragic fire.”

It appears only one person was in the home at the time of the fire, according to Pegg.

The fire is now under control and crews are on site checking for hotspots.

The fire was upgraded to a third alarm at its peak with about 70 firefighters in attendance.

“So technically we went to a third. It’s what I would describe as a third security alert that was essentially operating at a second alert level, but the incident commander appropriately escalated to a third alert to make sure we have enough people,” Pegg said.

The cause and origin of the fire is unknown.

Pegg said today’s damp weather made it difficult to extinguish the fire.

“Working in this type of temperature and humidity is really, really hard on firefighters who are in their protective gear. So there’s a lot of extra attention that our rehab specialists and our colleagues at Toronto Paramedic Services put on them to make sure , that core body temperatures are safe and that everyone is safe and responsible.”

An investigation is underway and the fire marshal’s office has been notified.