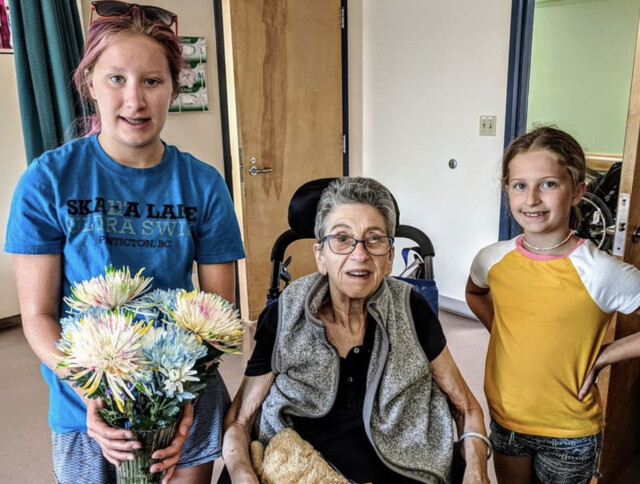 A Penticton teenager who has been an open swimmer since she was 10 years old is using her talents to raise money for a cause close to her heart.

“On August 14th I’m swimming from Peachland to Penticton to raise money for Alzheimer’s research because my grandmother passed away in March from Alzheimer’s and she had it for over 10 years,” said Issie Grecoff.

“This disease really runs in my family, even on my father’s side.”

The now sixteen-year-old has just returned home from California after swimming at the Far Western Championships.

“I’ve been competitive swimming for nine years now. I race in the pool all year and then in the summer I switch a bit to open water.”

Grecoff has completed the three- and seven-kilometer Rattle Snake Island swims, as well as the 11.8-kilometer Skaha Lake Ultra Swim.

Back in 2019, Grecoff raised $4000 for the Alzheimer Society of Canada through Ultra swimming.

“So every year I wanted to build up my swim distance, raise more money, but because of COVID I had to take a break from doing that. So this is the first year I’ve been able to increase my distance . and try to raise more money.”

In 2020, Grecoff swam his own open water swim in Quebec, swimming 24 kilometers in Lake St. John.

When she goes on the Okanagan Lake swim next Sunday, Grecoff faces a distance of 32 kilometers.

“It will probably be about 12 hours. I did my 24 kilometers in seven hours. So I expect it to be a bit slower at the end, the last 10 kilometers,” she said.

Grecoff will use a wetsuit, drink lots of hot fluids and different hitting styles to keep his body warm throughout.

“We also have Float Okanagan from Kelowna sponsoring us and they’re donating a boat for my swim. So that’s really awesome,” she added. “The boat will follow me throughout the swim and will have all my food on board and all the things I need. And then we’ll also have a little kayaker and paddle boarder closer to me… just to make sure , that I’m safe.”

So far, Grecoff has raised almost $3500 for the Alzheimer Society of Canada with a goal of reaching $5K.

Support comes from family, friends and neighbors to help Grecoff.

“I’ve heard back from some people that I don’t even know who are like, ‘Yeah, this disease touches my family, and I’m really happy that you’re raising money for this.'” So I really hope, that people understand that this means a lot to me and that it also affects many different people.”

“I just really hope that people will come to the finish line and donate a little.”

For more information about Grecoff’s swim and to donate, visit her website here.