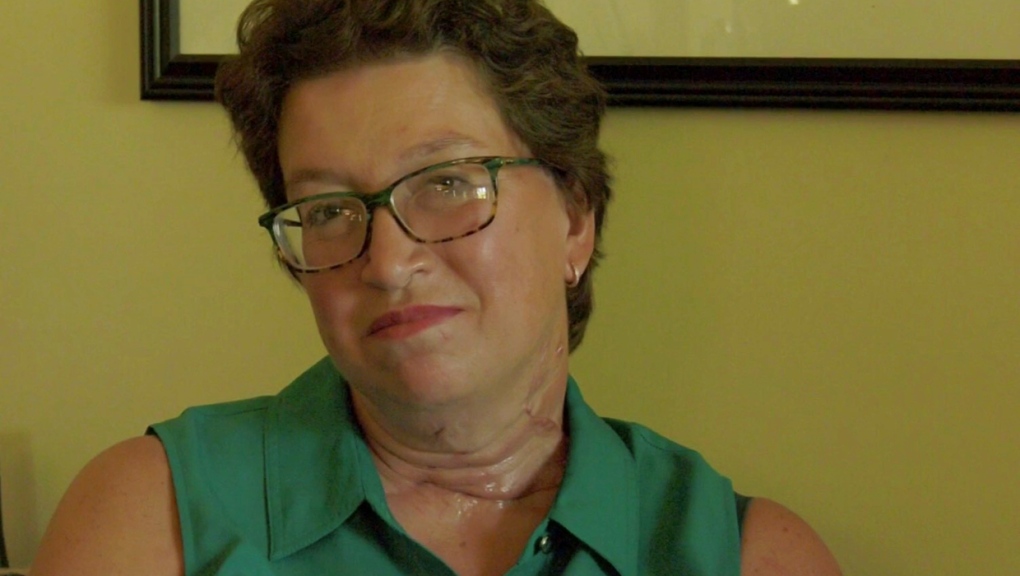 The scars on Kathryn Linder’s neck and body will be a reminder of how a normal day changed her life.

“It was just a normal Thursday afternoon at the office,” she said. “I was doing paperwork and answering a few calls when she came in and wanted to talk to one of our attorneys who wasn’t there.”

Linder says that once she and their intern said they could get the lawyer on the phone, she asked to use the bathroom.

“Our summer student took her back to do it and she came out a few minutes later with a gun pointed at us and said I need to talk to him or I’ll kill you both,” Linder recalled.

Linder was trying to call another organization where the attorney was when she was forced into an office at gunpoint.

“She closed the door, which would have been done for privacy, but when she pushed the two chairs up against the door, my heart kind of stopped and I went, oh, that’s not good,” Linder said.

Held there for an hour, Linder says a police negotiator called, but she was forced to hang up on him. Another call was made by the dealer, but Linder said that didn’t change anything. She says the dealer called a third time and Linder answered it, and that’s when her attacker pointed the gun at her and told her to get on her knees and turn around.

“The next thing I knew she was standing in front of me pointing at me,” Linder said. “She said get on your knees and turn around and I said ‘you don’t want to do this’ and she said it again so I stood up a bit more because I was leaning against a file cabinet and I thought by myself, if you’re gonna hurt me, you’re gonna look me in the eye and do it.

Linder tried to fight her off by pushing on her chest. She let out a scream and that’s when two officers burst into the room.

“They pulled her off me and one officer kept his hand on my neck the whole time until we got into the ambulance where the paramedics were,” she said.

She was stabbed in the neck several times. Covered in blood, Linder was taken to hospital and it took 56 stitches to repair her wounds.

“I remember looking at my thumb and seeing the cut, I looked down and saw the blood on my shirt and all the files on the desk, but I really didn’t realize what had happened,” Linder told CTV in an interview on Friday.

Linder does not remember the ambulance ride to the hospital, but says she spent eight days recovering.

Linder tells about the incident, while in that time in the office she remembers how she prayed.

“I was like, how is this going to go? What’s next? Mostly just really calm, I was praying quite a lot because that’s how I get through any bad situation,” she explained.

After the hostage-taking, Linder’s best friend, Alana Wheeler, began planning a blood drive in her honor.

“Knowing that she lost a lot of blood, it was just one of those ironies I guess that we never know what’s going to happen and life is short and that’s a good reason to donate blood,” Wheeler said.

Linder is an active donor, and Wheeler thought the drive would be a great way to raise awareness about blood donation while honoring her friend. The blood drive will take place from August 9 to 11 at the Lethbridge Plasma Donor Centre.

As for Linder, she is expected to make a full recovery.

“Physically and mentally, I will recover because I am strong,” she said. “Everyone has asked if I need anything or if I need help, the support from my family and friends is overwhelming.”

Linder isn’t sure when she’ll return to work, but says she’s grateful to everyone who helped her.

“The two officers that were in there first saved my life without a doubt, I have to credit my faith and God, I shouldn’t have survived that,” Linder said.

Courtney Louise Shaw is charged with attempted murder. She remains in custody until her September 1 court date.