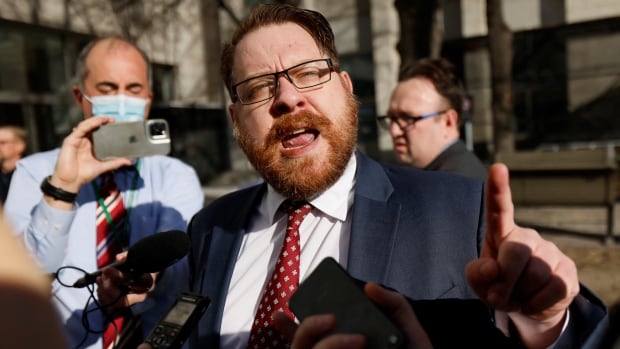 Strategic communications firm Enterprise Canada has served lawyer Brendan Miller with a defamation notice in response to allegations Miller made this week about one of the firm’s employees.

Miller is the legal counsel for a group of convoy protest organizers before the Public Order Emergency Commission, which is investigating the government’s decision to declare a state of emergency on February 14 to lift anti-public health measures in Ottawa and deter border blockades.

During Monday’s hearings, Miller suggested — without citing evidence — that Brian Fox, a partner at Enterprise, carried a Nazi flag amid protest crowds in Ottawa last winter so that photos would be taken and the protesters would be discredited.

Speaking to reporters Thursday, Miller said he was served with a defamation notice for making those allegations. He shrugged it off as an “intimidation tactic”.

“It doesn’t matter,” Miller said outside the hearings in Ottawa.

Miller filed an application with the commission this week to compel witnesses, including Fox, to testify about who brought Nazi and Confederate flags to the protests.

“It’s absolutely ridiculous,” Lietaer told guest host David Cochrane. “It has real consequences, I mean the threats … it has to stop.”

But Miller continued his barrage of questions about Fox throughout this week’s inquiry hearings and has tried at points to tie Enterprise and Fox to the Liberal Party.

Jason Lietaer, president at Enterprise Canada, said lawyer Brendan Miller’s comments are “false, they are defamatory and they have to stop.”

In a letter to Miller on Tuesday, Enterprise lawyer Jeff Galway said Fox was not in Ottawa during the protests earlier this year and that he remembered he last visited the city in 2019.

The letter also says Fox is a long-time member of the Conservative Party.

Lietaer said the firm has evidence — in the form of receipts and eyewitnesses — that Fox was in Toronto during the protests.

“You can’t fall for this kind of hoax. It’s patently false and we have to fight back on this kind of thing,” he said.

On Thursday night, Miller was mistaken by an observer who left the commission for Fox. Miller chased after the man and asked him if he would testify.

“Well, it was fun,” Miller said with a laugh after the meeting. “There is a hole in my case.”

Miller apologized to the individual.