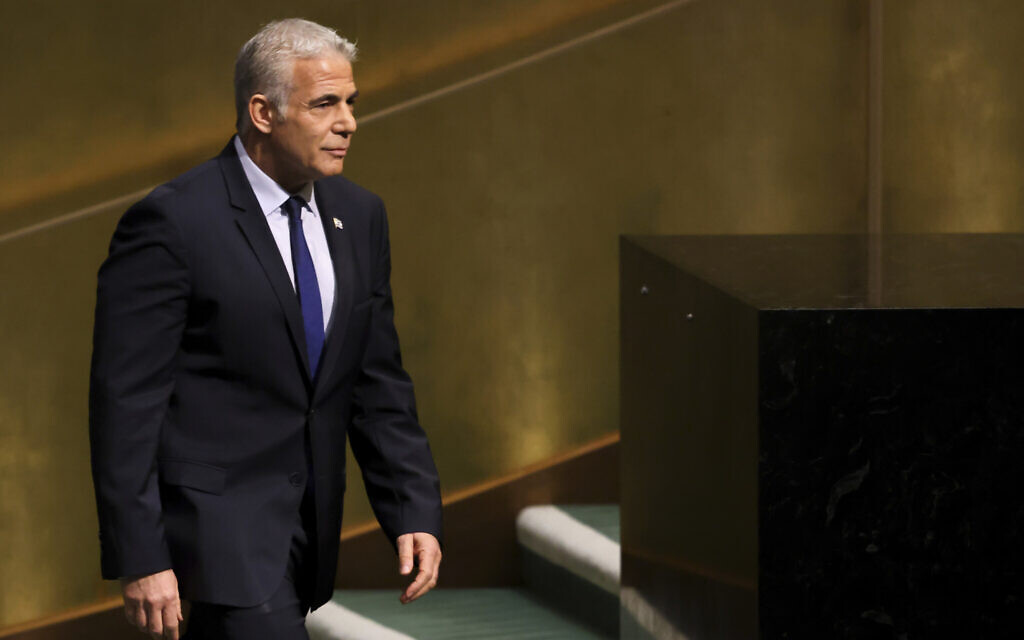 Six years after his predecessor last endorsed a two-state solution before the UN General Assembly, Yair Lapid revived an Israeli prime minister’s commitment to that vision in his debut speech on Thursday – presenting both the Palestinians and his own Israeli voters with a clear choice.

In 2016, from the same platform, Benjamin Netanyahu not only pledged his commitment “to a vision of peace based on two states for two peoples,” but went so far as to invite Palestinian Authority President Mahmoud Abbas to address the Knesset and offered “to speak to the Palestinian Parliament in Ramallah.”

Yet the tentative word that Lapid would reaffirm on the world stage his long-held belief that a peaceful Palestinian state alongside Israel represents the best prospect for the future of both peoples had provoked a domestic political storm more than a day before he even stood up to talk.

And it wasn’t just Netanyahu who kicked him out, but members of Lapid’s own outgoing coalition – many of whom he will need as allies if he is to have any chance of retaining power.

Delivered 40 days before Israel goes to the polls for the fifth time in three and a half years, Lapid’s carefully crafted, impassioned and at times personal address contained many passages directed at world leaders and to viewers throughout the region.

But his vision of a thriving, powerful Israel that aggressively protects its security while proactively seeking reconciliation will be meaningless if he cannot keep Netanyahu in check on November 1. And Netanyahu is vote on 60-61 seats in the Knesset with 120 members.

Therefore, Lapid strove to differentiate himself from the Likud leader, both to a domestic audience and a global one, by supporting the two-state goal, on the basis of which the Jewish state was revived by the United Nations 75 years ago.

Well aware that the current Palestinian leadership is unable and unwilling to rise to the challenge, and that this is unlikely to change in the foreseeable future, he nevertheless tried to persuade some of the undecideds watching at home – and perhaps especially the undermotivated Arabic Israeli voters, on whom his electoral prospects may depend – that his approach is worth proving supportive.

“In the government that I lead, there are Arab ministers. There is an Arab party as a member of our coalition. We have Arab judges in our Supreme Court. Arab doctors save lives in our hospitals,” he said early on. “Israeli Arabs are not our enemies. They are our partners in life.”

Confronts his hosts and condemns Iran

No sooner had Lapid left the podium of the General Assembly than Netanyahu kept atypically away from the place where he became such a frequent presence, posted a video calling the speech “weak” and “defeatist,” criticizing Lapid for returning to Palestinian statehood and doing nothing to stop Iran.

Eschewing Netanyahu’s use at the UN of images and cartoons to bolster his arguments, Lapid was actually robust in his Iran comments, confrontational in his condemnation of his UN hosts’ positions and decisions, and taking pains to make it clear to the Palestinians and their advocate that their independence will not be achieved if it remotely threatens Israel’s.

In world leadership mode, Lapid lamented the poisoning of democracies “by lies and fake news”, and warned that “ruthless politicians, totalitarian states and radical organizations are undermining our perception of reality.”

He gave a powerhouse example of the poisonous strategy used against Israel, citing the case of a “three-year-old Palestinian girl,” Malak al-Tanani, who was apparently killed along with her parents in an Israeli air strike on Gaza in May last year. In fact, it was the “heartbreaking picture” of a girl from Russia; “Malak al-Tanani does not exist.”

The child in the photo was not a victim of an airstrike in Gaza.
The photograph was taken in Moscow, 2018. Source: https://t.co/HDX9EASjLM Based on the latest pictures on Instagram, the baby is doing well. Please do not post this picture. pic.twitter.com/uHicR0PqH6

From there, he moved on to the broader effort to delegitimize Israel—”in the media, on college campuses, and on social media,” and rose to the UN itself, among the grimly reliable majority of nations that oppose Israel in virtually every forum , to the delight of liars and perverts.

“The question is not why they do it, but why are you willing to listen,” Lapid said accusingly, depicting the willful international blindness as an iteration of anti-Semitism, for which he gave two definitions: “Anti-Semitism is the willingness to believe that worst about the Jews, without question,” he said resonantly. “Anti-Semitism judges Israel by a different standard than any other country,” he continued in a more familiar formulation.

“I am not a guest in this building,” he added in another potent reproach. “Israel is a proud sovereign nation and an equal member of the United Nations. We will not remain silent when those who wish to harm us use this very stage to spread lies about us.”

Regarding Iran, Lapid referred to the current anti-regime protests there, sparked by the death of Mahsa Amini in the custody of the morality police, and protested the world’s silence as “young Iranians suffer and struggle from the shackles of Iran’s regime… [and] cry for help on social media.”

He derided the “industry of hate” that sees the regime manufacture huge quantities of the flag of an Israel it loathes, solely to burn them. But he also gravely warned that “if the Iranian regime gets a nuclear weapon, they will use it.”

Deviates from the American approach, as he publicly does deviated with visiting US President Joe Biden in July, Lapid argued that only a “credible military threat” will keep Iran from the bomb. Only when Iran is deterred would it be time to “negotiate a longer and stronger deal with them.”

But if the world continues to take the easy option — choosing “not to believe the worst, despite all the evidence to the contrary” — then Israel will act, he made clear: “We have the capabilities and we are not afraid to use them. We will do whatever it takes. Iran will not get a nuclear weapon. We will not stand by while there are those who try to kill us. Not again. Never again.”

‘Put down your weapons’

Lapid had opened his speech with an account of Israeli and Arab foreign ministers at the Negev summit in March defies a deadly terrorist attack that took place in Hadera when they met, issuing a joint statement that “condemns the attack and sanctifies life, cooperation and our belief that there is another way.” Shortly after his speech on Thursday evening, in yet another bloody confirmation of the widespread hostility, eight Israelis were slightly wounded in a terrorist attack near Modiin.

Returning to the Palestinian issue and to terrorism towards the end of his speech, he sought to reframe the Israel-Goliath/Palestinians-David narrative, reminding the watching world that Israel lives in a predatory neighborhood – with Syria’s murderous regime , Hezbollah-dominated Lebanon and Hamas-run Gaza on its borders – where to let your guard down is to endanger your existence.

“You can ask us to live according to the values ​​of the UN Charter, but you cannot ask us to die for them,” he declared.

“My father was a child in [Budapest} Ghetto, my grandfather was murdered in a concentration camp,” Lapid went on, mentioning his family history, as he often has. He then also spoke, less characteristically, of his autistic daughter Yaeli, whom he had to wake in the middle of the night last May “and run down with her to the bomb shelter, because missiles were exploding above our home. All those who preach about the importance of peace are welcome to try running to a bomb shelter at 3 a.m. with a girl who does not speak.”

Debunking the myth of Israel and the Jewish people as illegitimate colonizers, alien to the region, as perpetuated by PA President Mahmoud Abbas among others, Lapid insisted: “We are not going anywhere. The Middle East is our home.”

But Israel is also strong enough, he said, to confidently seek peace with “every Muslim country — from Saudi Arabia to Indonesia.” Echoing the Declaration of Independence, he promised: “Our hand is outstretched for peace.”

Netanyahu, his election rival, has moved further and further from the two-state vision in the past six years. Far from inviting Mahmoud Abbas to the Knesset these days, he has lately worked to bolster the representation of the Religious Zionism party, whose leader Bezalel Smotrich would ban Mansour Abbas and other current Arab Israeli politicians from parliament.

Lapid’s was the speech of an Israeli centrist, of an interim prime minister who knows it will be a struggle to muster a parliamentary majority in an Israel that has gradually shifted rightward, but perhaps not as far as Netanyahu has.

He championed his country, he underlined its power, and he offered cooperation in this first address at the UN General Assembly. Forty days from now, we’ll see if the Israeli electorate makes it a one-off or a habit.