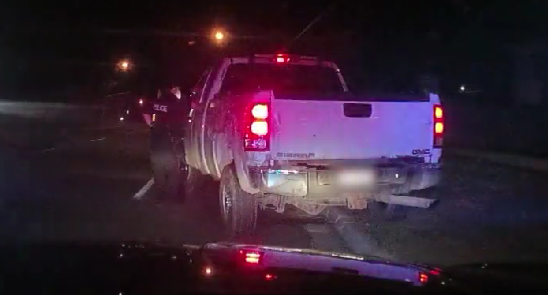 A man is facing impaired driving charges after being seen driving erratically and hitting curbs in Richmond Hill.

York Regional Police posted a video on their social media account Friday showing another driver calling officers to report that a pickup truck hit a curb.

“I think he’s drunk or something,” the caller is heard saying.

When the officers caught up with the driver, they were parked on a curb.

The driver is heard in the video saying he is lost and trying to get to Toronto.

“I don’t know this place,” he is heard saying.

When the officer asks the driver if he has his license, the man replies that he has nothing but his shorts.

The officer is then heard telling the man that he can smell alcohol and that he is betraying his words. The driver is then arrested.

He has since been charged with driving with more than 80 milligrams of alcohol in his system and driving with a suspended license.

In the video, York police thanked the person who called the incident, saying they are one of about 3,500 people a year who call police to report impaired driving.

“These calls save lives,” they said.