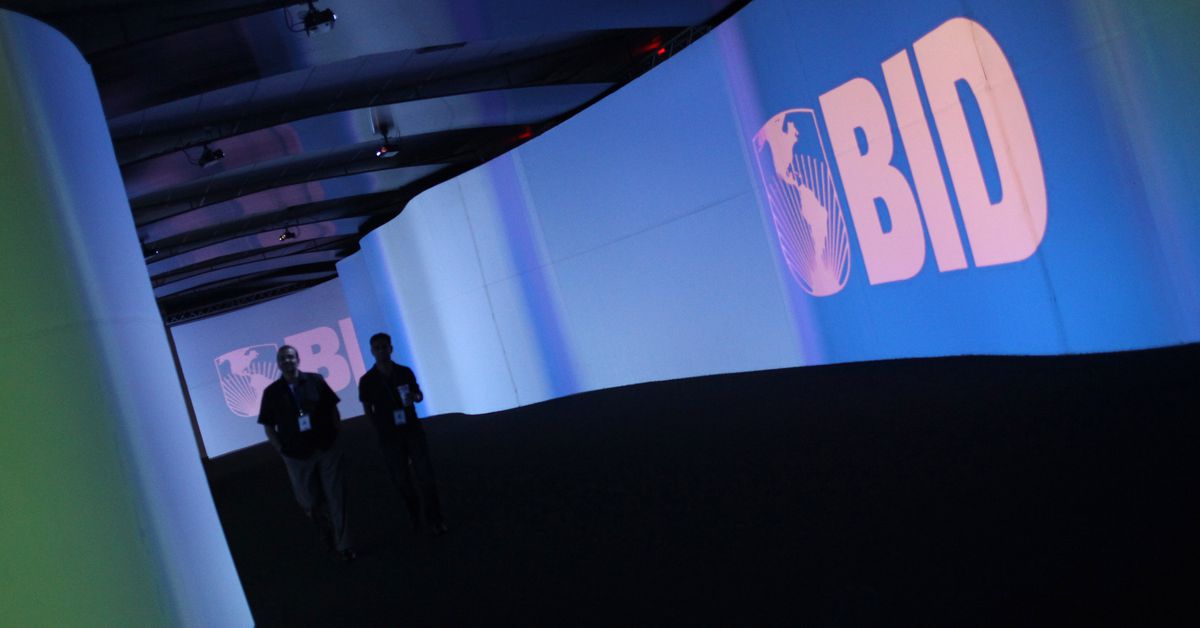 Visitors walk past a screen with the logo of Banco Interamericano de Desarrollo (BID) at the Atlapa Convention Center in Panama City March 13, 2013. REUTERS/Carlos Jasso

The recommendation throws the final decision regarding Latin America’s largest development bank to its senior-most body, the board of governors, which will vote from Friday through Tuesday, one of the sources said.

Claver-Carone did not immediately respond to a phone call or text message seeking comment.

A U.S. Treasury spokesperson declined to confirm the vote, but said the United States, the bank’s largest shareholder with 30% of its voting shares, supported Claver-Carone’s removal from office and wanted to see “swift resolution” by the governors.

“President Claver-Carone’s refusal to fully cooperate with the investigation, and his creation of a climate of fear of retaliation among staff and borrowing countries, has forfeited the confidence of the bank’s staff and shareholders and necessitates a change in leadership,” the spokesperson said.

Claver-Carone, in a statement in response to the Treasury said, “It’s shameful the U.S. commented to the press before notifying me and that it is not defending two Americans against what is clearly fabricated information.”

The bank’s 14 directors voted after four long days of discussions and an appearance by Claver-Carone, who had been in New York for meetings on the sidelines of the United Nations General Assembly this week.

Reuters reported on Wednesday that the board was nearing consensus on a vote to fire Claver-Carone.

Termination of Claver-Carone, a nominee of former U.S. President Donald Trump, requires a majority of the total voting power of the governing board. The bank’s three largest shareholders – the United States, Argentina and Brazil – together hold nearly 53% of the voting power. Claver-Carone took office in October 2020.

The governors are expected to approve the recommendation, said one of the sources.

Legal firm Davis Polk told the directors it found evidence to support whistleblower allegations that Claver-Carone had engaged in an intimate relationship with a subordinate and engaged in misconduct that violated the bank’s rules.

Investigators said they had uncovered evidence including a photograph of a hand-written contract on the back of a paper placemat, purportedly written and signed by Claver-Carone and the staffer, which stated, “we deserve absolute happiness” and a clause that stipulated any contract breach would result in “candle wax and a naughty box.”

U.S. officials were particularly concerned by Claver-Carone’s “behavior during the investigation, including his refusal to make available his IDB-issued work phone and other records,” a separate source familiar with the matter said.

They took issue with his “selective and misleading release of confidential information intended to taint the investigation and shape public opinion,” the source said. This had “undermined confidence in Claver-Carone’s trustworthiness and ability to lead a rules-based multilateral development institution,” the source added.

Claver-Carone also denied “direct evidence” that he had been in an undisclosed relationship with an IDB staff member who reported directly to him, and to whom he gave raises totaling more than 45% of base pay in less than one year, the source added.

U.S. officials felt Claver-Carone had created “an environment in which staff feared retaliation, including what appears to be actual retribution against senior and rank-and-file staff who participated fully and honestly in the investigation,” the source said.

U.S. Senator Patrick Leahy, who chairs the Senate Appropriations Committee, had strongly opposed Trump’s nomination of Claver-Carone as the first American to lead the bank, a job traditionally held by someone from Latin America.

“That tradition should be reinstated, with a person of the highest integrity and professionalism,” Leahy told Reuters.

Reporting by Andrea Shalal in Washington and Cassandra Garrison in Mexico City; Editing by Josie Kao and Stephen Coates

Mexico-based reporter focusing on climate change and companies with an emphasis on telecoms. Previously based in Santiago de Chile and Buenos Aires covering the Argentine debt crisis, the tussle for influence between the United States and China in Latin America and the coronavirus pandemic.