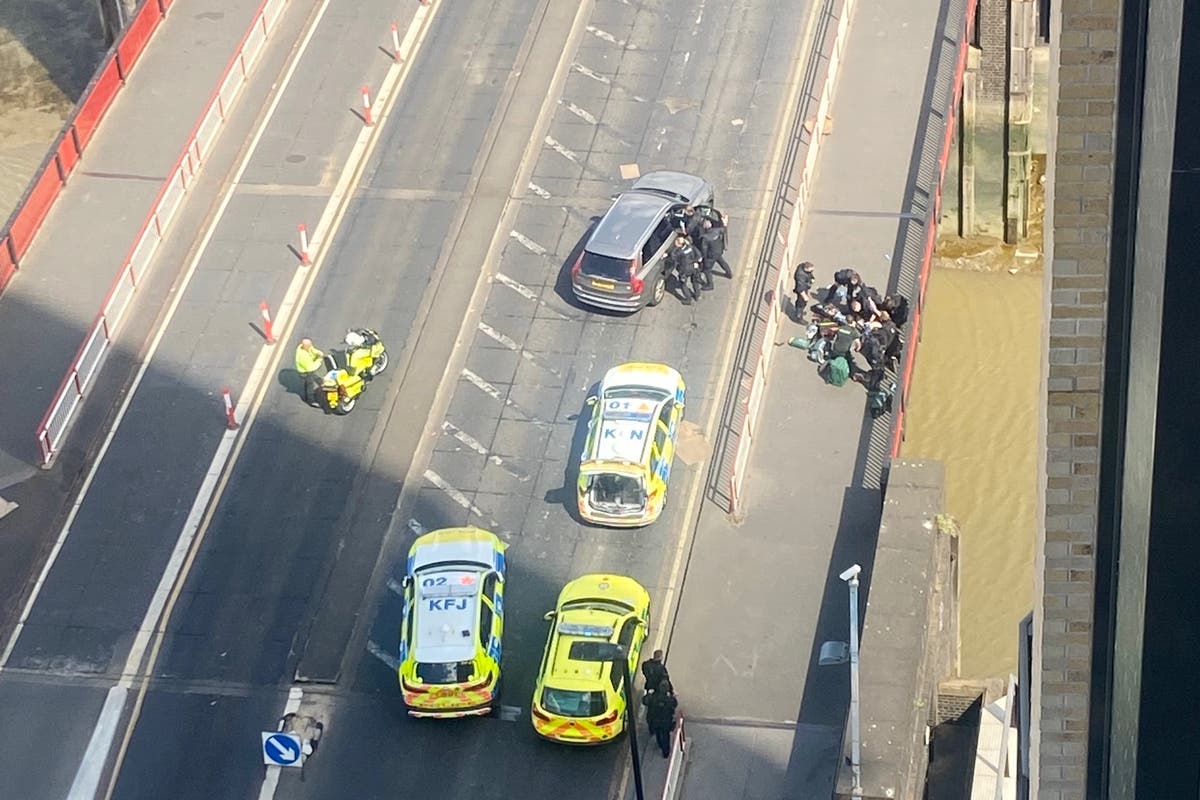 Olic said they shot one male after being called to reports of a gunman on the loose.

Residents heard gunshots after police confronted it suspect on a bridge in Creek Road, Greenwich at 2:30 p.m. Friday.

Images show a silver car surrounded by police while a man lying in a pool of blood is being treated for a gunshot wound.

Police said they received several 999 calls after locals saw a man with a firearm.

Specialist firearms officers rushed to the scene where they found the suspect.

Scotland Yard said officers fired their weapons and the man was injured.

His injuries are not believed to be life-threatening.

Gary Clarke, who has lived on a nearby property for more than three decades, said: “I just heard the gun go off, I heard a ‘pop’ from my bedroom.

“Then four minutes later I heard the air ambulance, the police showed up. My daughter was walking over there and she said, ‘Someone’s been shot on the bridge.’

“She was quite shocked and a bit shaken. You don’t expect someone to do that in broad daylight – it’s quite shocking.”

Gemma Daly, 31, from Whitstable but living in Greenwich, said she heard some shouting and then “a big bang” which she believes was a gunshot.

She said she heard police sirens immediately, adding that emergency services then began to arrive.

“Police attended to a man on the side of the bridge,” she said, adding that he was “clearly injured”.

“They removed his clothes,” she said, describing how “many people” worked on the man before he was placed on a stretcher.

Daly said police “started circling” a silver car that was still on the bridge.

A Scotland Yard spokesman said: “He was treated at the scene before being taken to hospital.

“No other injuries have been reported. Significant barriers are in place. We ask the public to avoid the area.

“Although the investigation is in the early stages, this incident is not believed to be terror-related or that there is an ongoing threat to the wider public.”

ONE London Ambulance Service The spokesman said: “We sent a number of resources, including an ambulance man, an advanced paramedic, a motorcycle paramedic, a doctor in a rapid response vehicle and an incident response officer, and we also sent doctors from the London Air Ambulance.

“We treated a man at the scene and took him as a priority to a major trauma centre.”

The Directorate of Professional Standards watchdog has been notified of the shooting.