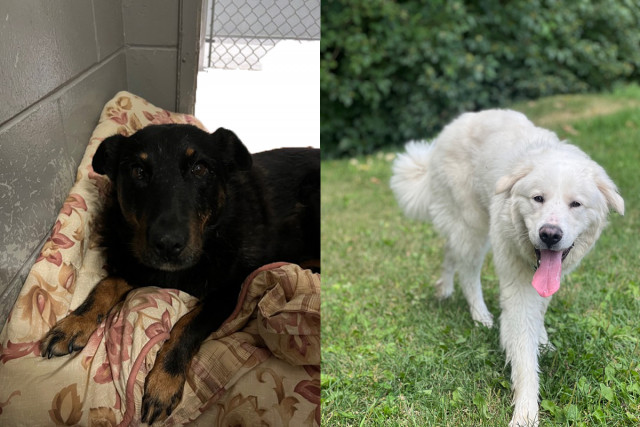 Two dogs missing after a burglary at the BC SPCA in Prince George are seen in a composite image.

The BC SPCA in Prince George is looking for four missing dogs after a burglary Thursday night or early Friday morning.

A total of seven dogs were released from one area of ​​the building, North Cariboo SPCA senior manager Jamey Blair said. One remained at the shelter and two others were located this morning. Two dogs located in another part of the shelter were not released.

“When staff arrived at the shelter this morning, they discovered that someone had broken into the shelter and let out all the dogs in one area of ​​the building,” Blair said in a statement released Friday.

Two of the missing dogs were kept at the shelter as part of the SPCA’s animal control contract with the city, she added. The dogs are described as a Rotweiler mix and a Great Pyrenees mix.

“We suspect the break-in was related to these two dogs, but this has not been confirmed,” Blair said. “If anyone sees these dogs, we ask that they please contact the Prince George SPCA at 250.562.5511 immediately with their location. We want to get them safely back to the shelter as soon as possible.”