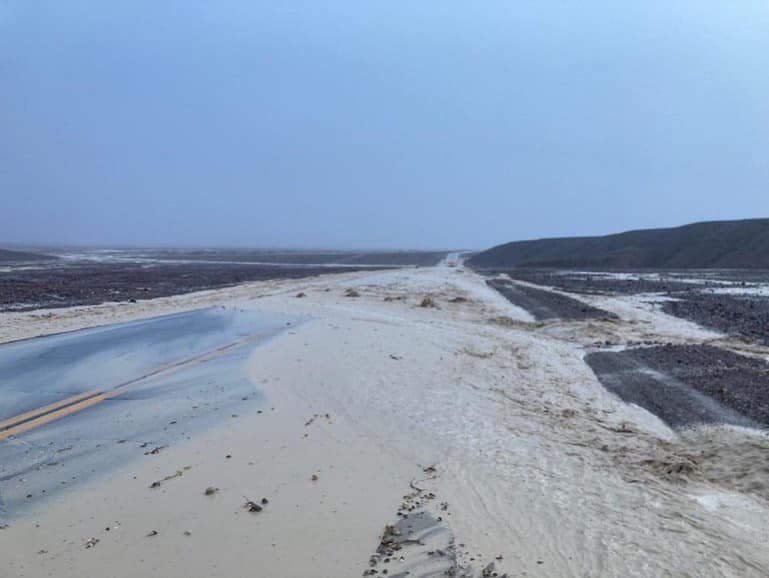 Flash floods sweep through Death Valley National Park has closed the park, including all roads in and out of the park, as well as the Furnace Creek Visitor Center.

About 1,000 people are stranded in the park, according to park officials. No injuries have been reported.

The park received 1.7 inches of rain Friday morning, an entire year’s worth of rain for the area in a matter of hours. Annual rainfall for the park is 2 inches.

DEATH VALLEY FLOODING: Highway 190 is closed in Death Valley due to flooding Friday morning. FOX5 viewer Landt Robert shared video of flooding in the area that he captured around 7 a.m. Friday. pic.twitter.com/2XGaaL1blE

“Highway 190 is closed and additional roads in the park may be affected or impassable due to flooding,” a post on Death Valley National Park Facebook account warned. “Use extreme caution.”

Caltrans has estimated it will take about four to six hours for the roads to reopen.

“Caltrans and National Park Service crews are working to plow ‘admin-use’ lanes out of the park,” Abigail Wines, a spokeswoman for Death Valley National Park, told SFGATE. “Some vehicles have been able to exit via CA-190 to Death Valley Junction, depending on the type of vehicle they have.”

Here’s a look at some of the flooding currently flowing across State Route 190 through @DeathValleyNPS . The highway that stretches from Olancha to Death Valley Junction remains closed at this time due to flooding. pic.twitter.com/z8M4N6ARKH

This is the second flood to hit the national park this week. On Monday, a storm surge swept through a car off Highway 190immerse it in waste.

There is no word yet on when Highway 190 or the park will reopen.

The Associated Press contributed to this story.