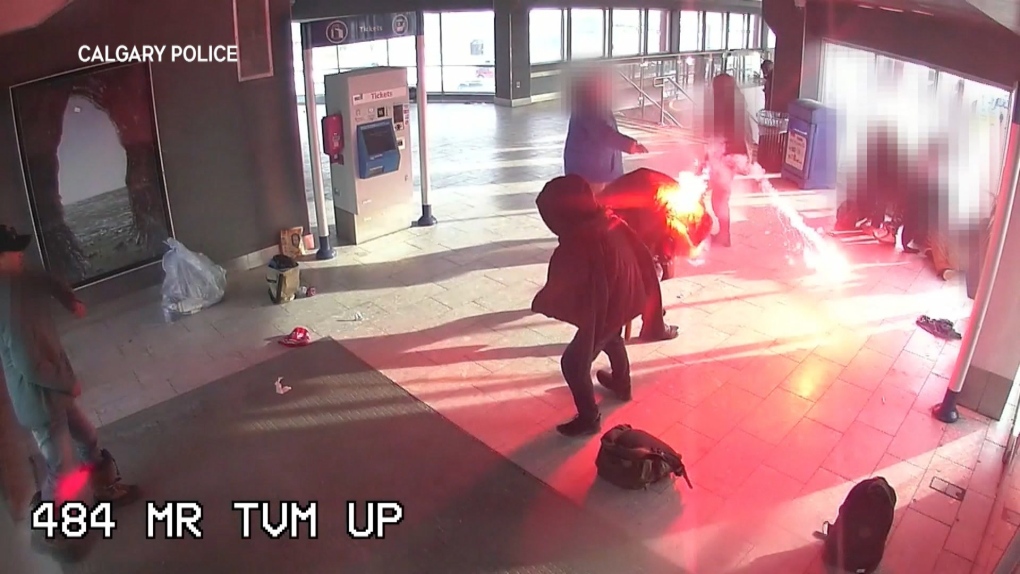 In the middle of the afternoon this past Thursday, a fight between several people at the Marlborough CTrain station saw one set on fire with a flare gun.

A moment later he was lit up again.

Calgary police released video of the incident Wednesday showing a number of men interacting on the upper level of the northeast station.

In the footage, one of the men throws a punch at another and finds himself fending off multiple opponents.

Pipes are pulled from the clothing and used in the melee, eventually knocking the man who started the fight to the ground.

The video released by police cuts to a later time when it appears the man who started the fight left to return with an object in his hand.

He appears to shoot one of the other men with a flare, setting fire to his coat and possibly his hair.

The others watch as the flaming man falls and rolls to extinguish himself, then grabs what appears to be one of the pipes and gives chase, resulting in a brief struggle before he is shot and is on fire again.

The video released by police ends with the twice-flaming man on the ground and the rest of the men fleeing.

Police say this incident happened at 2.15pm on November 17 and that bystanders were present as the brawl unfolded and struggled to keep clear of it.

One person was arrested and a firearm was seized.

Mossing, who has been released after his bail hearing, will next appear in court on December 13.

Meanwhile, police are asking the public for help in identifying three others believed to be involved.

The first is described as:

The other is described as:

The third is described as:

Anyone with information is asked to call police at 403-266-1234 or submit tips anonymously to Crime Stoppers by calling 1-800-222-8477, visit calgarycrimestoppers.org or through the P3 Tips app.