A five-year-old boy who was mauled by a python and dragged into a pool in New South Wales is recovering well after his grandfather and father saved his life.

Ben Blake was with his son Beau at his grandfather’s pool at Ocean Shores near Byron Bay when the python attacked the boy yesterday.

“I just started sitting back in the lounge, just started enjoying a can and all of a sudden it was on,” Ben told NBN News.

The three-metre long python came “out of the blue” and latched onto Beau’s ankle.

“Before he even hit the bottom of the pool, it was completely wrapped around the leg… it was from the bite all the way up to around his knee joint,” he said.

Beau’s 76-year-old grandfather Alan Blake immediately jumped into the pool to save the little boy before Ben was able to remove the snake from his son’s leg.

“I looked in and there was the thing around his leg so I jumped right in to grab him,” Alan said.

Alan then passed Beau on to his father.

“I just grabbed it as close as I could to the head, squeezed and pulled,” said the five-year-old’s father.

Beau is a little subdued today after yesterday’s panic.

He went to the hospital where the wound was cleaned.

“He’s an absolute trooper, once we cleaned up the blood and told him he wasn’t going to die because it wasn’t a venomous snake, he was pretty good,” Ben previously told 3AW.

“I think the python was waiting for a victim to come along, a bird or something, and Beau was it.”

Ben released the snake back into the bush after the incident, but the creature wasn’t too keen on slipping away.

“He went back to the crime scene, the naughty thing,” Blake said.

Snakes are common in northern NSW, but the family had never seen one near the pool. 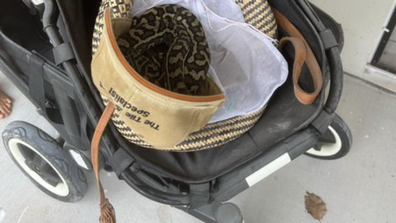 “We used to check for spiders around the pool, but now we’ll be looking for snakes,” Ben said.

“If I wasn’t so close, he would have been underwater and who knows what would have happened.”

When little Beau recovers, he will have a good story to tell his friends at school.