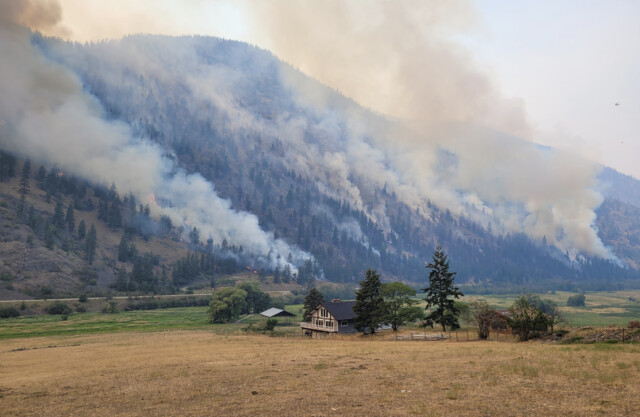 Wedded by Keremeos Creek Brand from Ollala on Saturday

Warmer temperatures on Saturday compared to the past few days have increased fire activity for the Keremeos Creek Wildfire.

BC Wildfire Service fire information officer Mikhail Elsay said the increase was expected and crews are prepared for it.

“Crews are making good progress over Ollala putting hand guards so they are doing a good job of creating containment lines,” he said.

The 426 firefighters stationed at the fire are on rotating shifts, with the majority of firefighting being during the day.

The fire remains an estimated 5903 hectares in size, with BCWS constantly mapping the fire as it changes and grows.

“Crews are doing a good job out there. We will continue to work the fire through 24-hour cycles for the foreseeable future,” Elsay added.

Over 540 properties in rural Keremeos, the Apex area and Olalla remain on evacuation orders, with a further 1,050 properties in the area under alert.

An interactive map of all properties on order and alarm can be found online here.

The BC Wildfire Service said crews were challenged overnight Friday while battling the Keremeos Creek Wildfire.

The southern flank, north of Ollala had some spots and flare-ups.

“They were able to intervene and then do some hand ignitions to solidify their lines and stopped the fire at the cliff north of the village. There has been no fire damage to structures overnight,” BCWS said in their Saturday morning. update.

“On the northeast flank, crews were challenged by winds in the area and are working to build emergency lines.”

The fire is currently estimated to be 5903 hectares in size.

Along with 15 helicopters and 40 pieces of heavy equipment, there are 260 wildland firefighters assigned to this fire, working with an additional 166 structural protection personnel from fire departments across BC for a total crew of 426 firefighters.

The BCWS said they expect a strong upper ridge to pass over the area on Saturday.

Crews will build lines around Hedges Butte toward McKay Creek as well as build fuel-free and handguards from McKay Creek toward Green Mountain Road.

On the western flank, crews will use direct attack methods from Green Mountain Road to Keremeos Creek Forest Service Road. Heavy equipment will be used to establish emergency lines from Apex Mountain over Dividend Mountain to southern Keremeos Creek.

Crews have been assigned to contain the fire north of the Highway 3 corridor.

Highway 3A remains closed at this time between the Highway 97 junction in Kaleden and Keremeos.

click here for an interactive map of all properties on order and alarm.

ORIGINAL: 4 in the morning

There are 166 structural protection personnel from fire departments across BC responding to Keremeos Creek Wildfire on Friday as over 540 properties in rural Keremeos, the Apex area and Olalla remain on evacuation orders.

A further 1,050 properties in the area are under alert.

An update Friday afternoon listed the fire at nearly 6,000 acres and had closed Highway 3A.

BC Wildfire Service sent out a post Friday night specifically to thank the Structural Protection Department, which has “played an integral role in the defense of property in the immediate vicinity of the wildfire.”

To help the fire brigade in their work are 21 fire engines, 15 water tenders and a mechanic.

These teams are a composite of over 35 fire departments, according to BCWS, as well as many individual resources that have provided assistance in responding to this wildfire.

“The BC Wildfire Service recognizes and appreciates the longstanding partnership with the structural firefighting community,” they wrote.

The wildfire broke out on Friday, July 29 and has so far resulted in the loss of one home.