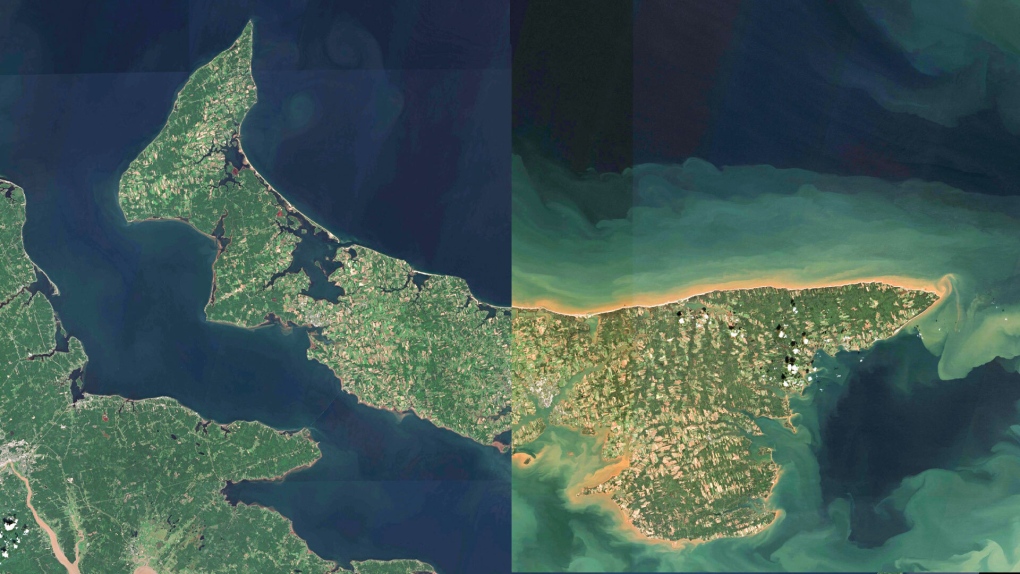 When Hurricane Fiona made landfall over the weekend as a post-tropical storm, Prince Edward Island and one of its most important ecosystems suffered significant damage as the storm triggered erosion on the province’s coastline.

Pictures from Canadian Space Agency showed the extent of the storm’s strength as it swept through the province. Citizen scientists on the ground also captured its impact on the dunes of national parks including Dalvay, Brackley and Cavendish Beach.

Chris Houser, a science professor at the University of Windsor, says the damage to Dalvay National Park’s sand dunes is unlike anything seen before.

“The dune was basically cut in half,” Houser told CTVNews.ca in a phone interview Tuesday.

“It lost a lot of its volume, it’s going to collapse eventually, lose a lot of its height, and most of the sediment went offshore, and some of it went behind the barrier through little flushing channels.”


Meteorologists has described Fiona as one of the most impactful storms to hit the Atlantic region as wind gusts reached over 100 kilometers per hour with some areas in PEI approaching 150 km/h. Although the storm’s greatest strain was its endurance, as strong winds provided a constant storm surge that lasted for hours.

Houser says early reports from his team of citizen scientists include Parks Canada’s Coastie Initiative states that high tides caused by the storm took almost 10 meters from the dune and approximately 30 cubic meters for every meter of sand was lost from the beach. While the dunes naturally recover on their own, it will likely take years for the dunes to recover due to Fiona’s strength.

“It’s going to have an impact on that system over the next couple of years because it could take almost 10 years for that system to fully recover,” he said.

Sand dunes are an important ecosystem for the province, says Jennifer Stewart of Parks Canada PEI. She says they play an essential role as a natural barrier to protect other ecological communities and ourselves from future extreme weather events.

“During Hurricane Dorian in 2019, we lost an average of two meters of shoreline through PEI National Park, and so we’re used to having hurricanes in this area, but I haven’t seen this level of erosion before,” Stewart told CTVNews.ca in a telephone interview on Tuesday.

Sand dunes are able to regenerate themselves during the spring when the beach vegetation begins to grow marram grass. This grass is essential for rebuilding the dunes, as the grass traps sand to grow new dunes, and spreads below the surface of the sand to create roots that form a web to hold the sand in place.

“That’s the protection we would have against the forces in the Gulf of St. Lawrence,” she said. “So not having that sand dune there, it leaves us a little bit more vulnerable to damage from winter storms and weather in general.”

But with the effects of climate change increasing every year, ecosystems like the dunes may not recover quickly enough before additional extreme weather events cause more damage.

With melting ice sheets triggering rising sea levels, Houser says storms like Fiona will only increase over time, further delaying the recovery process for these ecosystems. In addition, warmer winters that are unable to create ice over our lakes can cause further damage to the dunes, as the ice would normally give them a break from consistent waves.

“I think the most important piece here is the recovery. The erosion is always such a dramatic event and we focus on that, but the main thing that will determine how the system will change is the recovery, which is going to take year to a decade,” he said.

Houser says it’s become more important than ever for citizen scientists and environmentalists to continue collecting photos and data about the effects of these extreme weather events to better understand ways to protect these ecosystems.