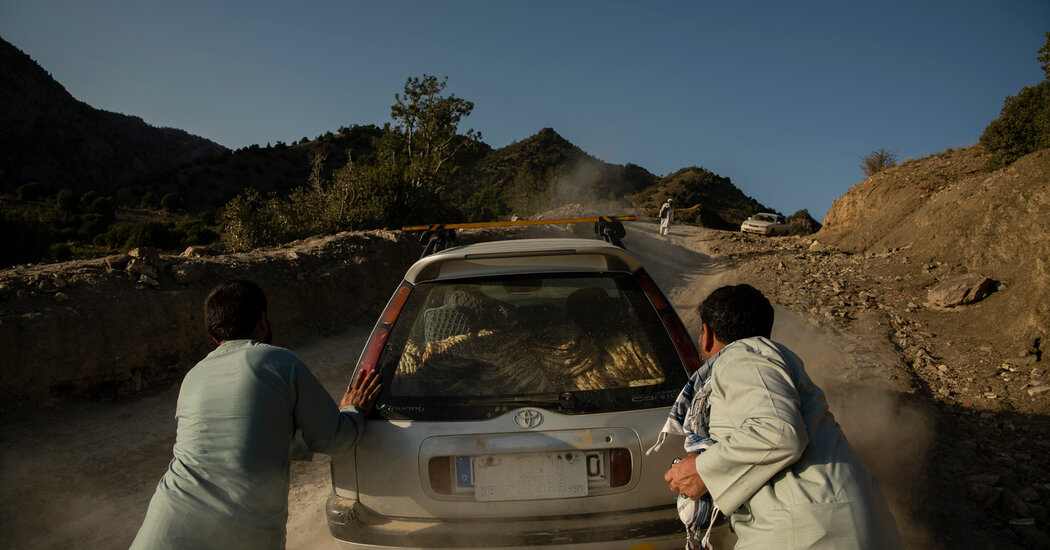 In the village of Azor Kalai in the Geyan district, partially destroyed houses of mudstone were scattered over the mountainside – their walls collapsed and ceilings broken. Among them were the white tarpaulins of makeshift tents that most surviving residents had built as temporary shelter.

Even before the devastating earthquake, most families in the village survived day by day, earning just enough to feed their families by gathering and selling fruit — such as apricots, apples, and pine nuts — from nearby forests or by finding labor in a nearby day. bazaar, say residents. Many earn no more than 5,000 afghanis – or $ 55 – a month.

Early Thursday night, sheep painted around the tents while women sorted through the few things their families managed to save from the rubble.

Padshah Gul, 30, a worker, stood outside what was left of his home, in the fresh night air. Where once lay two large rooms, was now a pile of rubble and a makeshift tent with blankets and pillows that other relatives brought to his family after the earthquake.

The family’s few belongings – pots, pans, utensils – were still buried under the rubble, he said. Mr. Yellow buried his face in his hand, thinking he should find the money to rebuild his home

“We have to stay here, winter or spring,” he said, pointing to the makeshift tent.

Still, he said he felt lucky to be alive.

When the quake struck, Mr Gul and his brother were sleeping outside their shared family home in the cool night air. Suddenly, he heard a loud, low rumble from the mountains nearby as boulders began to crash down them, he said.

Within minutes, the ground beneath him began to shake, and he could hear the walls of the house where his relatives slept collapsing.

For a terrifying 15 minutes, the earthquake and aftershocks shook the village around him. When the ground finally stood still, he and his brother hurried into what was left of their common home. In the midst of the dust, he could glimpse the lifeless faces of his cousin and sister-in-law, both of whom had been killed.

He also saw limbs protruding from the rubble and heard the voices of his relatives shouting for help, he said. Among them was a loud scream from his 12-year-old niece.

“We did not expect them to survive,” he said, but he and his brother began digging – for more than eight hours. By the end, they had rescued at least a dozen other family members alive, including his niece.

In the center of the village, aid organizations and workers with the Taliban government’s Ministry of Rural Rehabilitation and Development set up a temporary distribution center for aid. As dusk descended, crowds of men helped unload bags of flour, rice and blankets from the backs of dusty trucks into bright blue tents, getting things ready for distribution.

Many trucks had driven more than 24 hours from Kabul, the Afghan capital, and tipped slowly along the unsafe roads into the remote district. Lots of armed Taliban security forces flanked the site.

Ali Mohammad, 40, arrived at the scene on his motorcycle in hopes of registering his name with the aid groups and getting support to rebuild his home, which had been destroyed.

Three of his cousins ​​were killed when the house collapsed, he said. His surviving 16 family members now lived in a temporary tent.

“I’m too sorry for all of us. Either we have to wait for help to rebuild our house, or we’ll be displaced and have to leave everything that’s ruined here,” he said.

“I think we’re leaving to continue our lives,” he added, looking at the tarpaulins and bags of flour loaded into the distribution site. “But then we have to start again from scratch.”