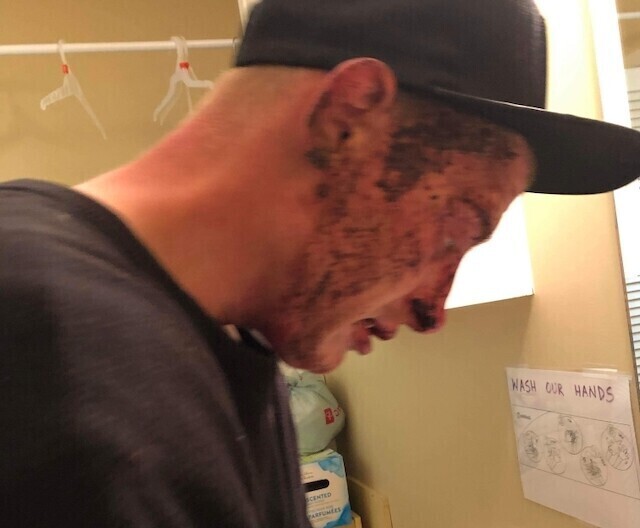 The judge presiding over a Kelowna RCMP officer’s assault trial may ultimately have to decide which “use-of-force” expert she believes – the Crown’s or the defence’s.

Const. Siggy Pietrzak was charged with assault about a year after he was caught on film repeatedly punching Tyler Russell in the head during a daytime arrest in downtown Kelowna. Pietrzak was the third officer on scene and he delivered the blows while Const. Carter and Const. Donahue struggled to get Russell to the ground.

The trial began in May of this year, and it’s carried on far longer than originally scheduled. Pietrzak wrapped up his own testimony Wednesday.

Earlier in the trial, Crown prosecutor David Hainey called upon Staff Sgt. Leonard McCoshen to provide expert evidence about police officers’ “use of force,” and how Pietrzak’s actions lined up with police training and policy.

McCoshen ultimately testified Pietrzak’s conduct was not in accordance with RCMP training and policy, but on Thursday, Pietrzak’s defence counsel David Butcher called his own police “use-of-force” expert in the trial.

Sgt. Brad Fawcett testified Thursday that he disagreed with McCoshen’s assessment of Pietrzak’s actions, and said Pietrzak acted appropriately and legally under the circumstances.

Fawcett is a retired sergeant with the Vancouver Police Department and an instructor at the Justice Institute of BC and the VPD.

During his testimony, McCoshen took issue with four aspects of Pietrzak’s actions during Russell’s arrest – his failure to communicate with Const. Carter and Const. Donahue when he arrived at the scene, the fact that Russell was “actively resistant” rather than “assaultive” during his struggle with the officers, two punches would have sufficed rather than what appears to be about eight that were thrown, and Pietrzak’s failure to assess and then reassess the situation as it unfolded.

Sgt. Fawcett said he disagrees with all four of McCoshen’s opinions on the incident. He noted that it appears from the video taken of the incident that Pietrzak did not use “maximum effort” in the punches he threw, and that they appeared “largely inefficient from a striking perspective.”

One of the two videos taken of the incident was shown to Fawcett in court Thursday. Viewing the footage, Fawcett pushed back against McCoshen’s opinion that Pietrzak should have stopped first to communicate with the two other officers before punching Russell.

“As a supervisor, I’d be shocked if that sort of conversation took place under those sorts of circumstances. I’d expect the officer to provide immediate assistance,” Sgt. Fawcett said.

He said if he was supervising an officer in a similar situation who first stopped and asked how he could help the other officers, he would “be having a discussion afterwards,” asking about the officer’s “apparent timidity and reluctance to engage.”

Fawcett also said one his common criticisms of officers is that they’re “too timid in their approach to controlling somebody.”

While McCoshen said Russell did not appear to be “assaultive” during the struggle, Fawcett testified that the balling of Russell’s fists and his attempt to avoid control should be “categorized as assaultive.”

While Russell admitted in his own testimony last May that he was intoxicated on the day in question, he said he was sitting in the passenger seat of a truck when Const. Carter approached him and he did not have the vehicle’s keys on him. He refused to provide a breath sample to the officer which led to the attempted arrest, but no charges were ever laid against Russell.

In an ongoing civil suit Russell has filed against Pietrzak and the RCMP, Russell’s lawyer Michael Patterson said his client had “no obligation to comply with unlawful demands” from the officers.

Despite McCoshen’s 30 years of experience in the RCMP and his work as an instructor with with the RCMP since 2004, defence counsel Butcher opposed the qualification of McCoshen as an expert. But Judge Mariane Armstrong ultimately qualified McCoshen, and then Fawcett, as experts on police use of force for the trial.

Fawcett is no stranger to testifying as an expert in court. One of the most high-profile cases he testified in was the 2009 Braidwood inquiry into the 2007 death of Robert Dziekanski at the Vancouver airport, after Vancouver Police Department officers stunned the Polish immigrant five times with a Taser.

During the inquiry, Fawcett testified the officers’ actions were reasonable, based on the “officer’s perspective” at the time. Ultimately, Commissioner Thomas Braidwood disagreed with Fawcett’s assessment, concluding the officers were not justified in using the Taser. Braidwood, a former B.C. Appeal Court justice, called Sgt. Fawcett’s evaluation of the incident “blinkered.”

“The force-centric analysis [the officers] applied to the circumstances they faced appears to me to have been entirely predictable, given the similarly blinkered approach taken by Sgt. Fawcett and Cpl. Gillis in their evaluations and analyses,” Braidwood wrote in his 470-page report on Dziekanski’s death.

“I interpret the expert testimony of these two senior and experienced officers as reflecting the use-of-force training that occurs within the RCMP at large and in BC’s municipal police departments. If that is so, it troubles me greatly.”

Crown and defence in the Pietrzak matter are expected to deliver their closing submissions on Oct. 7.

Tyler Russell shortly after he was discharged from KGH following his arrest in May 2020.