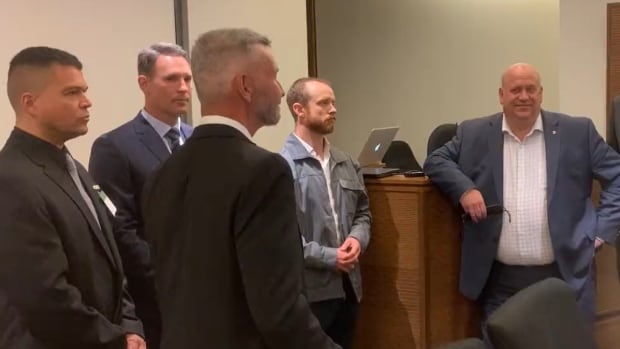 A group of Conservatives in Canada met with some of the people planning protests in Ottawa this summer, including organizers of the Freedom Convoy, which occupied the streets of downtown earlier this year.

James Topp, a veteran marching across Canada to protest remaining vaccine mandates, is due to end his trip on June 30, but he drove into Ottawa on Wednesday to attend the meetings.

He was joined by Paul Alexander, a former official of the US President Donald Trump’s administration, and Tom Marazzo, who served 25 years in the Canadian forces and had a failed bid as an Ontario MPP candidate.

Marazzo was invited by James Bauder to come and help drive the Freedom Convoy during protests in Ottawa earlier this year.

Bauder, who faces charges in Ottawa and continued to protest in British Columbia after leaving the city in February, is responsible for creating Canada Unity group and website that helped develop the initial convoy plan to get to Ottawa.

Daniel Bulford, another organizer who helped coordinate the Freedom Convoy, was also at the meetings on Wednesday.

Bulford is a former RCMP officer who was on the prime minister’s security detail before stopping after refusing to get the COVID-19 vaccine. He was the convoy’s security chief and boasted of having strong relations with the police.

Takes place in a government building near Parliament Hill, a few days after Ottawa suspended vaccine mandates for federal employees and passengers traveling to Canada, Alexander told lawmakers that the “COVID-19 pandemic is over” and criticized what they call “the government’s excessive reach” – in one case, he blamed shutdowns on the May 24 school shooting in Uvalde, Texas, which left 19 children and two teachers died.

Topp told MPs that a number of groups formed by the Freedom Convoy had gathered under one umbrella to continue protesting.

“Their problem is not so much with mandates anymore, it’s their satisfaction with the federal government,” Topp said. “There is a divide in this country that I have never seen or experienced before – I have only ever seen it in a war zone.”

Topp has been met with community support as he traveled around the country, and many are expected to gather in Ottawa on June 30 to be there when he officially completes his march. About 20 MPs greeted him in what he characterized as a “well-received” meeting.

“I understand they have busy schedules, I’m sure things are happening in the background that I’m not aware of, it’s their case, not mine,” he said. “The fact is, those who showed up here showed us the courtesy and acknowledged what it took to get them into the room.”

Cypress Hills-Grassland MP Jeremy Patzer offered his support to Topp and his group, saying it is a message he has also been trying to get out of.

A handful of CPC MPs mtg with James Topp, Danny Bulford, Tom Marazzo in a Parliament building – posing for photos and shaking hands before formalities begin. Topp is a key figure in the ongoing freedom movement that stems from #freedomconvoy earlier this year < a href="https://t.co/EcaB7dMJFO">pic.twitter.com/EcaB7dMJFO

“These are just average citizens who have concerns. As members of parliament, if we are not willing to hear the concerns of the average person, then we are failing to do our job,” he said in an interview with CBC.

He added that he would “meet with anyone who wants to meet with me who has a concern”, saying the group does not have extremist views.

“I am not willing to demonize or accept this narrative that people who have views that other people do not agree that they must be demonized to have those views,” he said.

During the convoy earlier this year, some CPC MPs met with protesters parked near Parliament Hill, but others, including the Prime Minister, did not.

In all, about 20 MPs – all from the CPC caucus – were present on Wednesday, including leadership hopes Leslyn Lewis, Warren Steinley, John Barlow, Ryan Williams, Dean Allison and Arnold Viersen.

Topp said he invited all MPs to attend.