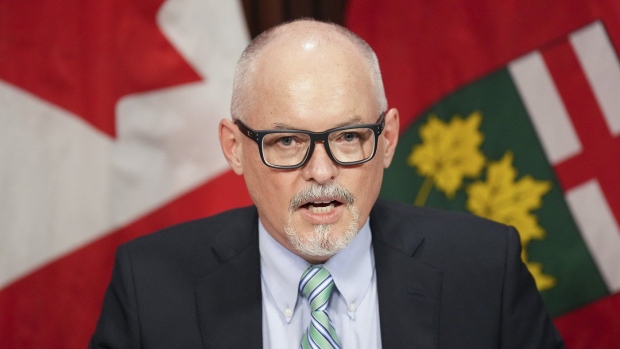 TORONTO – The seventh wave of COVID-19 in Ontario has peaked, the province’s health chief said Friday.

Dr. Kieran Moore said in an interview that key indicators are peaking or already trending downward.

“I think we’ve already started the downturn,” he said.

“It’s always easier to look back and say where we were, but from our vantage point just today, it’s definitely stabilized, and we’re seeing a decrease in the overall number of people admitted, stabilization in the ICU, which are typically late indicators, and at the provincial level the effluent is decreasing.”

Public Health Ontario says The number of COVID-19 cases fell in 22 of Ontario’s 34 health units in the week ending July 30, with percentage positivity falling slightly week over week and hospital admissions falling to 306 compared to 463 the previous week.

46 COVID-19 deaths were reported in the week ending July 30, compared with 75 the week before.

Moore said he expects the overall risk and impact on the health sector to continue to decline through August.

Looking ahead to the fall, a new wave of COVID-19 may not be as bad as Moore would have predicted a few months ago, he said, although colder weather that pushes more activities indoors increases the risk.

Many Ontarians have already been infected with the Omicron strain — seroprevalence studies suggest half the population has natural immunity, he said — and that bodes well, combined with high vaccination rates and the fact that a new strain of concern has yet to emerge , Moore said.

“It will be difficult for a very similar virus to spread in our populations,” he said.

“So we’re scouring the globe with Public Health Ontario, the Public Health Agency of Canada to try to see if there’s a new variant out there that poses a risk to us. But we see a period of calm in the coming weeks and months, because we are unable to see a new threat on the horizon at this time.”

There is still a risk of reinfection with Omicron, Moore said, but people who have been vaccinated and infected are much better protected than people with an infection but no vaccination.

Ontarians age 18 and older have been eligible for a fourth dose of a COVID-19 vaccine for three weeks — previously it was only available to people age 60 and older, as well as immunocompromised or Indigenous adults. Just under 16 percent of Ontario adults have received four doses, Moore said.

In the particularly vulnerable population of people age 80 and older, about 61 percent have received a fourth dose, Moore said.

Also, vaccines for children under five became available a week ago, and Moore said 9,000 have received their first shot. That’s about one percent of the total population of Ontario in that age group.

“It was expected in August to be low numbers as parents are busy on holidays and certainly expect those numbers to increase as we move into autumn,” he said.

This report from The Canadian Press was first published on August 5, 2022.