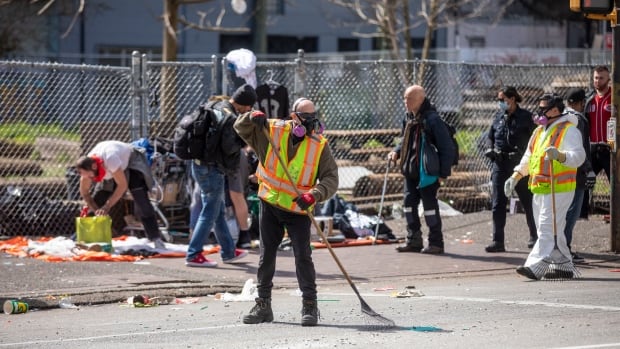 The City of Vancouver apologized for damage caused during daily “street sweeps” by Downtown Eastside and promised to find an alternative way to keep the streets clean in a statement sent to CBC on Wednesday.

The apology follows a proposal to the Vancouver City Council Tuesday night calling for changes to the way sweeps are conducted.

During these sweeps, which take place daily from Monday to Friday, city workers, accompanied by police officers, remove debris from sidewalks in Downtown Eastside.

The city said their crews are trained to remove debris, debris and structures that are abandoned but not items that are “clearly personal belongings.”

But say proponents the sweepers sometimes throw out things that people value.

“We sincerely apologize and apologize for any damage and trauma that has been caused as a result of this work, and we acknowledge that important items have been discarded,” said Taryn Scollard, deputy chief engineer for engineers in the statement.

The proposal, which was put forward by the county council. Jean Swanson, calls for the city to develop an alternative community-driven process of clearing the streets using peer-to-peer workers instead of police.

It also requires the development of storage facilities and the creation of a system where people can easily pick up items that are taken.

The proposal did not go to the polls, but Scollard said city staff will incorporate elements of the proposal into their work with the community this summer. She said they will have more information to share in the coming weeks.

Art. Steve Addison of the Vancouver Police Department said in a statement to the CBC that police officers will no longer accompany city workers after July 1st.

Addison said the city asked officers to accompany the workers due to safety concerns.

“We have long argued that this is an inappropriate use of police resources and is not a central police service, but we have temporarily complied with the request,” Addison wrote.

Meenakshi Mannoe, who works as an advocate for the Pivot Legal Society, said that in theory it makes sense to sweep the streets to keep sidewalks clean and safe.

In reality, however, Mannoe said the way the city implements the policy displaces people who depend on public space.

An estimated value of $ 2,410 of personal property was seized by sweepers over a five-day period in 2021, according to a report conducted by several organizations, including the Pivot Legal Society.

Mannoe said these belongings are either thrown away or stored in a way that makes it difficult for people to retrieve them.

A city worker performing these sweeps once compared their job to the game ‘whack-a-mole’ because they were constantly moving people, Swanson said.

“They move people from one place and then they go to another place. And then they have to move them from that place, and so on.”

Swanson recalled a sweep she observed when a man suffering from pneumonia was asked to move his tent from Oppenheimer Park on a cold day.

“He had no place to store his tent, no way to carry it or anything … he just raised his hands and left.”

As a volunteer for the Carnegie Community Action Project at the time, she knew there was no vacancy for him.

Because the proposal did not move forward in the council on Tuesday, the city announced that speakers would not be heard at Wednesday’s standing committee meeting.

The Pivot Legal Society said in a statement that more than 30 community members had signed up to speak in support of the proposal at Wednesday’s meeting.