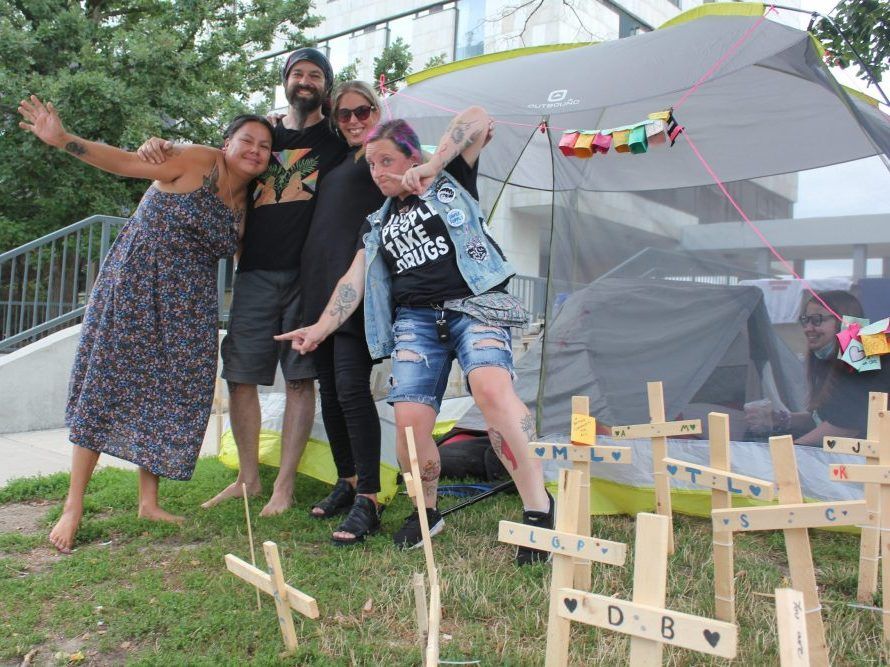 An agreement between city officials and a coalition of frontline homeless workers has ended a hunger strike on the steps of City Hall.

#TheForgotten519 coalition, the city and agencies involved in the discussions announced the end of the walkout late Friday afternoon.

It appears that most of the coalition’s demands to change the city’s approach to homeless encampments were met. There is also an obligation to plan new “shelter supports” before winter.

“Highlights of this plan include a shift in the response to camps to focus first on outreach and support, with bylaw involvement only at their request; greater involvement of frontline workers in camps; additional resources such as showers and increased water supply; additional training for municipal law enforcement; and agreed parameters that will guide when and how a camp is removed.”

A meeting for what the agreements refer to as “24/7 support” will be in mid-August, the statement said.

“The goal is to have a plan ready within four weeks,” the release states.

The hunger strike by outreach worker and Coalition member Dan Oudshoorn began on Tuesday in protest against city strategies that appear to be doing little to prevent deaths among London’s most vulnerable homeless people, those who live outside due to complex medical, physical and mental health challenges.

At least 34 people experiencing homelessness have died this year, up from 74 the year before, the coalition says.

The coalition demanded the city stop moving homeless people out of their camps on empty lots, fields and the river, saying it puts them at greater risk and traumatizes people already dealing with trauma. The coalition also wanted the city’s central response unit to focus less on bylaw enforcement and more on caring for the homeless. Finally, the coalition wants the city to set up two new shelters.

City officials initially insisted that they are only removing large and dangerous camps, that the core unit focuses on helping people, and that there are no resources for two new shelters.

But representatives from the city, the coalition and local agencies spent the last two days negotiating an end to the hunger strike.

“I feel a whole mix of emotions,” Oudshoorn said when the strike ended. “I’m overjoyed to see how the community has come together. I’m so relieved that we’re making a new approach. I’m also very sad for all the people I know who have died because it took so a long time before this change came.”

Because he hasn’t eaten in a week, soup is the first thing on the menu. But then he wants a burger, ribs and all you can eat buffet, Oudshoorn said.

“TheForgotten519 are overwhelmed and grateful to their community for making these urgent actions possible,” the coalition said in a statement. “We have seen the power of the collective voice of the frontlines and how this can achieve change. Although this is not always how it has been done, it was a clear demonstration that these things were necessary and achievable.”

The hunger strike in front of City Hall is officially over, frontline workers and city staff announced in a joint statement.
Dan Oudshoorn has only had water with electrolytes since 9 Tuesday when he began the strike in a tent outside 300 Dufferin. #LdnOnt pic.twitter.com/eqqkZSsAxg

Kevin Dickins, deputy head of social and health development, said the talks over the past two days were difficult, but the perspective of frontline workers was vital.

“Throughout the sessions, both yesterday and today, we have identified steps we can take – in the city and across the system – to better support people experiencing homelessness, addiction and episodic mental health challenges,” he said in a statement .

London Cares outreach was one of the agencies involved in the discussions.

“We appreciate everyone’s commitment and flexibility as we work quickly with immediate responses and look to the near-term future for more medium- and long-term solutions,” Anne Armstrong, chief executive, said in a statement.

Sign up to receive a curated collection of links and highlights from our award-winning breaking news coverage, in-depth analysis and unrivaled weekday lunchtime investigative features.

The next issue of the LFP Noon News Roundup will be in your inbox soon.