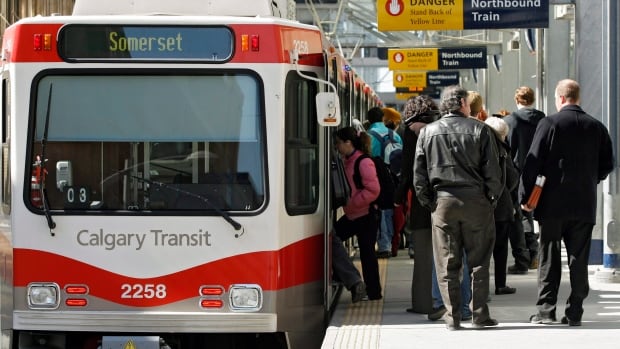 Warning: This story contains an image that some may find disturbing.

Several members of the City Council say they will ask the administration to consider closing access to non-paying customers at certain CTrain stations after a fight at a Northeast station last week.

Ward 10 Gr. Andre Chabot said he saw video of an incident in which a man’s jacket caught fire after another person appeared to fire a flare gun twice. Chabot called it a very worrying situation.

“Myself, and [Coun. Sonya] Sharpe and [Coun. Jennifer] Wyness has talked to the administration about looking at maybe piloting a closed system in some of the outlying areas, in some of the transit stations,” Chabot said.

“I think if we had a closed system in some of these stations that can actually accommodate that, where you have limited entry points, we can eliminate the kind of social behavior that occurs in our transit stations.”

Calgary police said they charged a man and seized a flare gun after the incident, which happened last Thursday at approximately 14.15.

Police claim four men became involved in a physical altercation, with some brandishing a pipe and a knife, as civilians tried to flee the area.

The man police believe fired the flare gun was arrested, but police are still looking for the other three men.

“This display of violence occurred in a busy public area, was extremely reckless and will not be tolerated,” said Acting Staff Sgt. Shelby Stewart, in a release.

Calgary Mayor Jyoti Gondek said the city is still waiting on funding from the provincial government, which announced earlier this year it would give money to cities to improve transit safety.

“I really hope we can access some of these funds quickly,” she said.

Ward 8 Courtney Walcott, meanwhile, said he would not support a closed system. He said he believed it would not address the larger systemic problems that have put people in such situations in the first place, and instead would simply relocate them to different areas of the city.

Earlier this month, Calgary police said they had conducted an enforcement blitz in October it had resulted in 45 arrests and 47 charges.