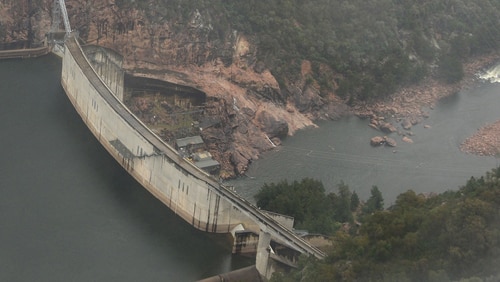 Water releases from Burrinjuck Dam are rising to 98,000 megalitres a day after heavy rain in parts of New South Wales.

The dam began to spill this morning as more than 230,000ml – a quarter of its full capacity – poured in from the 100mm of rain that fell in various tributaries overnight.

Water NSW said in a statement that flows from the Yass River into the dam were the “highest ever recorded”.

Controlled outflows are set to continue for weeks until levels fall.

Farmers along the Murrumbidgee River at Gundagai are moving their stock to higher ground in preparation, with the river forecast to reach major flood levels of 9 meters tomorrow morning.

No houses in Gundagai township are expected to flood, with Gundagai Caravan Park the only commercial property likely to be affected.

All of the park’s permanent cabins have been moved away from the site and visitors have been evacuated.

Manager Jane Dean said it was the first time in seven years the cabins had to be removed.

“Over the last seven years we’ve joked about it, but this time it’s serious.

“It has a huge impact on the business. This is our livelihood and after COVID and this, we can’t take a trick at the moment.”

Sir. Griffiths said four rescues had been carried out.

“We have some low water around the Temora area that is triggering some rescues for us,” he said.

“It appears that people were driving and were cut off on the road.”

Sir. Griffith said warnings were in place for drivers to avoid flooded roads.

“If the road you drive on normally gets flooded, assume it is and drive the long way around,” he said.

The SES has also deployed extra crews to Temora, which recorded 60mm of rain overnight.

Rivers north of the city rise.

“We had a band of rain that passed through Ivanhoe and out past Cootamundra that brought, give or take, 20 to 30mm last night,” incident manager Barry Griffiths said.

“It has stabilized overnight but it resulted in 71 calls for assistance.”

Further north, a woman has been found safe after her vehicle was swept away by flooding in the New South Wales Central West overnight.

At 6.30pm yesterday emergency services were called to Macdonalds Creek at Erudgere, about 15 kilometers north-west of Mudgee, following reports that a vehicle had been swept into an embankment by floodwaters.

A search and rescue operation led to the discovery of a vehicle submerged in the waterway.

Police were later notified that a 59-year-old woman was seeking help at a nearby property in Piambong.

She has been taken to Mudgee Hospital for assessment.

The rescue was one of seven local SES crews responded to across the region.

Others took place in Wellington, Gulf, Ballimore, Coonabarabran and Coolah.

“Unfortunately they were mostly people who made the pretty poor decision to drive through flooded embankments and they’ve been stranded as a result,” SES spokesman David Rankin said.

“We’ve seen falls of between 50 and 60mm across areas of the central west,” he said.

Rankin said SES crews received more than 45 calls for assistance, many of which were related to high winds.

“It’s been a really busy night, luckily the worst of the rain in the central west has passed,” Rankin said.

“But we still have flooding on Castlereagh, Bell, upper and lower Macquarie rivers, Bogan, Darling, Belubula.”

The SES has also deployed extra crews to Temora, which recorded 60mm of rain overnight as rivers north of the town rose.

“We had a band of rain that passed through Ivanhoe and out past Cootamundra that brought, give or take, 20 to 30mm last night,” incident manager Barry Griffiths said.

“It has stabilized overnight but it resulted in 71 calls for assistance.”

Editorial note 5/8/2022: A citation in this article has been updated to indicate that a shower passed through Ivanhoe to past Cootamundra. It originally had Idaho mistaken for Cootamundra.