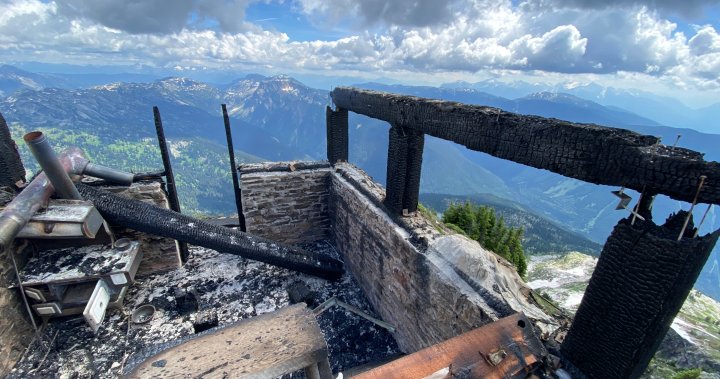 A popular hiking destination in Shuswap, BC, at the center of a long-running controversy has burned down.

It is unclear what started the fire at the site Eagle Pass Brand Lookout the place, but the flame creates new questions about the place’s future.

On Tuesday, Jason Reedyk and a friend hiked up to the site, high on a mountain between Sicamous and Revelstoke, only to find the cabin built on the lookout’s historic stone foundation had been reduced to charred ash.

Reedyk said the couple was shocked when the structure looked normal in recent photos of the site posted online.

“It’s a loss for the hiking community,” he said.

The hikers ended up using what they could find at the site to extinguish a remaining hot spot that was still smoldering when they arrived.

The fire is just the latest twist in the lookout’s history.

Six years ago, a group of volunteers spent hundreds of hours and thousands of dollars building a cabin on the historic foundation, but the reconstruction was unauthorized and the province issued a stop work order.

Fearing that the hut would be demolished, 13,000 people signed a petition against its demolition.

So for some, like Sicamou Councilman Gord Bushell, the news of the fire is devastating.

“There were people from all over the world coming to the interior of BC to hike to Eagle Pass Lookout. It could have been the eighth wonder of the world,” Bushell said.

However, there was no final solution to the fate of the unauthorized cabin before the fire.

Supporters saw the reconstruction as a grassroots effort to restore the structure and provide the public with new amenities.

Critics, including the provincial government, saw the rebuild as a violation of public property and worried about the impact on the environment and the historic elements of the building.

Last year The Shuswap Trail Alliance completed a report that outlined seven options for the site for the provincial government to consider.

The options ranged from rebuilding the fire lookout as it would have looked in the 1920s when it was first built, to removing it entirely.

However, stakeholders say that prior to the fire, the province had yet to take action on the site.

Now that the page is burned, the new question is what’s next?

“It would be nice to see it done properly with an application and some services as well. The problem Eagle Pass had was the number of people going up there,” Bushell said.

He believes that regardless of whether a structure is rebuilt or not, the site must ultimately be managed to address issues such as litter and toilet facilities.

The Shuswap Trail Alliance does not have a view on what happens to the structure.

“At the end of the day, the Shuswap Trail Alliance just wants to see care of the land as best we can, to be stewards of the area,” said Jen Bellhouse, the group’s executive director.

The province says it has not yet made a decision on the future of structures at the Eagle Pass Fire Lookout site and consultations will continue.