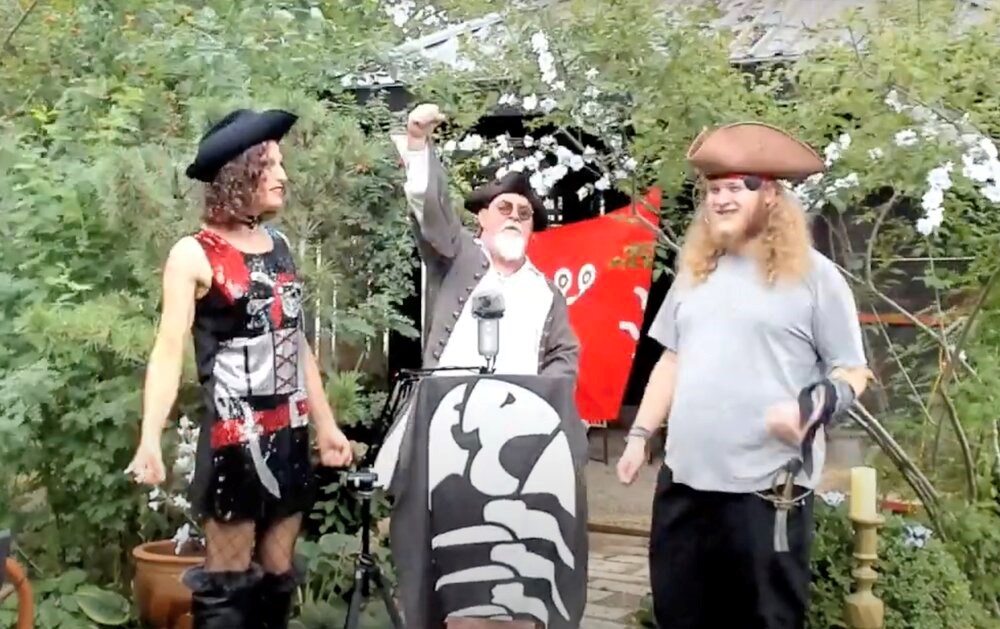 A couple from Christina Lake decked out in pirate costumes, triangular hats and swords have become the first in BC to tie the knot under the Church of the Flying Spaghetti Monster (CFSM).

Dani Magnussen and Jaromir Pavlat had their say promises September 19 before Dread Pirate Higgs, also known as Gary Smith, head of the church in the province.

Smith has been locked in a dispute with the Insurance Corporation of British Columbia (ICBC) over being allowed to wear a pirate hat for his driver’s license photo. ICBC has repeatedly rejected his requests.

Smith, who is also a provincially licensed marriage commissioner, opened the ceremony with a unique prayer.

“Our Noodly Lord Who Art in a Colander,” Smith addressed those gathered for the event.

“Al dente be your noodles. I bless your rum. You sauce be yum. With meat as it is with vegetables. Give us today our garlic bread, and forgive us our quarreling as we forgive those who offend us… For yours are the noodles and the sauces and the grog anytime and always. R’Amen. R’Amen. R’Amen.”

With that, Pavlat addressed those gathered at the garden event.

“I love you, honey, it’s true. And I don’t want to spend my life with anyone else.”

To which Magnussen replied: “I couldn’t possibly love anyone more.”

Smith encouraged the witnesses to raise any objections to the marriage and asked the couple to make their solemn declarations and a more traditional exchange of vows as legally wedded pirates.

Witnesses – some in pirate costumes, others in spaghetti monster hats and one in a sombrero – draped cooked noodles over the couple’s joined hands. The couple then ate spaghetti and kissed.

Smith produced a hip flask and the pair drank cups of grog.

“I present to you Dani and Jaromir, pirates forever,” Smith said.

Magnussen, who is from Thunder Bay, Ont., told Glacier Media that the pair met online and played video games. Pavlat is from a little further away – Vienna, Austria.

“He immigrated here to be with me,” Magnussen said, noting the wedding could be the church’s first in Canada. “I’m going to marry the man of my dreams.”

The newlyweds are members of the Church of the Flying Spaghetti Monster, which holds regular services in Grand Forks, about 20 kilometers west of Christina Lake.

“We don’t like organized religions,” Pavlat said. “So, to have a new religion that makes fun of other religions… we got married.”