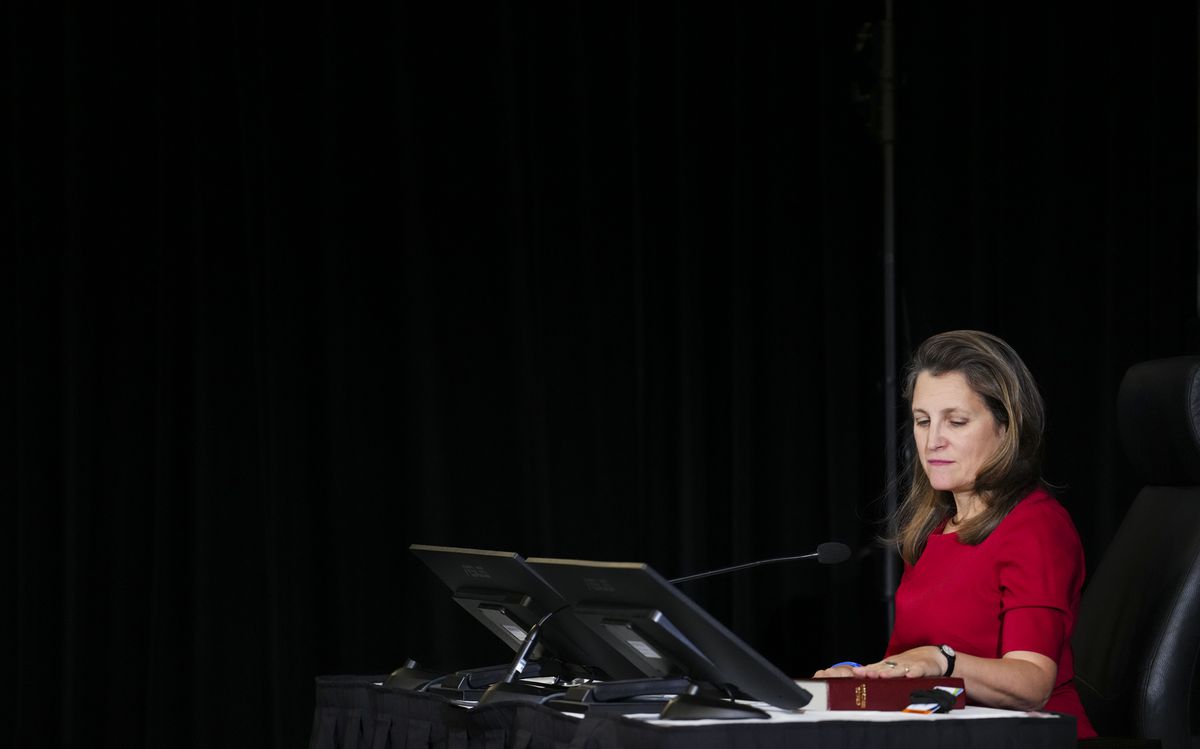 Canadian bank executives warned Deputy Prime Minister Chrystia Freeland on the eve of the federal government’s invocation of the Emergencies Act of risks to the country’s reputation, saying Canada was being called a “joke” as several key border crossings remained blocked by protesters.

During a call on February 13, a bank executive relayed the comments of an investor who had said: “I will not invest another red cent in your banana republic of Canada.” A reading from the call was presented with the inquiry, which studied the federal government’s invocation of the Emergency Act last winter. The managers’ names are redacted.

“If the investor you’re talking about is American, tell them we’re not like the United States that had people literally invade their legislature,” Ms. Freeland to the CEOs. “If they’re British, remind them of Brexit. If they’re French, remind them of the Yellow Vests. If they’re German, look at how badly they’re handling Russia right now.”

Another executive expressed concern that the banking system was seen as a “political weapon of the government” if they were asked to close bank accounts, while another raised negative coverage of Canada on Fox News.

She told the leaders she was “resolute in ending this occupation of our democracy” and said she would never support negotiations with those “who are holding our democracy hostage.”

In evidence before the Public Order Emergency Commission on Thursday, Freeland said the chief executive’s comment about a banana republic was “heart-stopping” for her. She described it as a moment that crystallized her understanding that the protests “deeply endangered the Canadian economy”.

Mrs. Freeland said the CEO who relayed that comment had spoken with an American investor that the CEO wanted to invest in Canada. She testified that she tried to rally the executives to stand up for Canada, and recalled telling them, “You’re playing for Team Canada. Don’t take that away from your investors.”

The readout shows one bank executive — who expressed concern that the banking sector is “being used as an arm of the government” — said the government needed a plan for how it would remove pandemic-related restrictions and commented that Canada’s restrictions were the strictest among the OECD countries.

Last week, Michael Sabia, the Treasury’s chief public servant, said testified to a race against time to stop the escalating economic damage created by the blockades and risks to Canada’s reputation as a reliable trading partner. These concerns rose to the level of discussions between Prime Minister Justin Trudeau and US President Joe Biden.

On February 10, Ms. Freeland spoke with Brian Deese, a senior adviser in the Biden administration. In an email summarizing the conversation, Ms. Freeland wrote, “they are very, very, very concerned.”

“He said he assumed this proved the point we had previously made to them about how closely integrated our economies are. (He didn’t seem to see this as a positive.),” Ms Freeland wrote.

At the time, the Ambassador Bridge in Windsor, Ont., a vital trade route, had been blocked for four days. It was cleared and reopened to traffic in the early morning hours of February 14 – before the Emergency Act was invoked.

“I could really see for the first time ever that the Americans had this yellow light flashing in Canada — and this yellow light was telling them, you know what, the Canadian supply chain could be a vulnerability,” Ms. Freeland said.

Mrs. Freeland also testified about the emergency law’s powers to freeze protesters’ bank accounts without a court order. About 280 accounts, totaling about $8 million in assets, were frozen using powers under the Emergency Act, according to a Treasury Department report filed with the commission.

“I regret that it happened to those people, I really do,” Ms. Freeland. “I would have preferred not to have had to do this, but in my mind I weigh that against what I really think are the tens of thousands, hundreds of thousands of Canadian jobs and families that we protected.”

In an interview with the inquiry prior to her testimony, Ms. Freeland argued that “a very serious threat to Canada’s economic security can constitute a threat to national security. Such a threat would have to be very serious, and it was in this case,” according to a summary of that interview.

The Emergencies Act says that in order to declare a public policy emergency, there must be “threats to the security of Canada” that are serious enough to mark a national emergency. The statutory definition of these threats comes from the Canadian Security Intelligence Service Act. The CSIS Act describes four types of threats to Canada’s security. No one refers to the economy.

On Thursday, the commission’s co-lead counsel, Shantona Chaudhury, asked Ms. Freeland about the connection between economic security and a threat to national security — given that the connection “isn’t necessarily obvious when you look at legislation,” the lawyer noted.

If supply chains with the U.S. fall apart because Canada is not viewed as a reliable partner, it would mean people across the country losing their jobs in related industries, she said.

“If that seems too abstract, I think you see it today in the geopolitical space where we’re actually seeing economic tools become weapons in actual wars,” Freeland said, referring to Russia’s war in Ukraine and the targeting of energy. infrastructure.

The deputy prime minister also said the threat to Canada’s economic security posed by the convoy protests poses a “personal threat” to many Canadians.

“They felt their government wasn’t protecting them. And they were right. We weren’t for a while.”